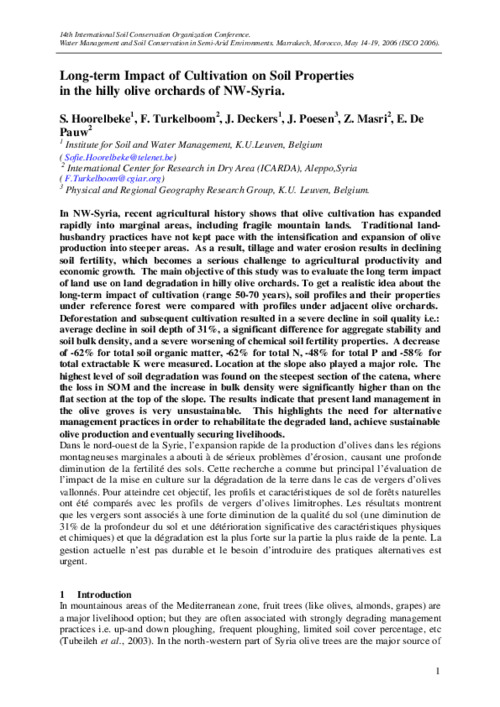 In NW-Syria, recent agricultural history shows that olive cultivation has expanded rapidly into marginal areas, including fragile mountain lands. Traditional land husbandry practices have not kept pace with the intensification and expansion of olive production into steeper areas. As a result, tillage and water erosion results in declining soil fertility, which becomes a serious challenge to agricultural productivity and economic growth. The main objective of this study was to evaluate the long term impact of land use on land degradation in hilly olive orchards. To get a realistic idea about the long-term impact of cultivation (range 50-70 years), soil profiles and their properties under reference forest were compared with profiles under adjacent olive orchards. Deforestation and subsequent cultivation resulted in a severe decline in soil quality i.e.: average decline in soil depth of 31%, a significant difference for aggregate stability and soil bulk density, and a severe worsening of chemical soil fertility properties. A decrease of -62% for total soil organic matter, -62% for total N, -48% for total P and -58% for total extractable K were measured. Location at the slope also played a major role. The highest level of soil degradation was found on the steepest section of the catena, where the loss in SOM and the increase in bulk density were significantly higher than on the flat section at the top of the slope. The results indicate that present land management in the olive groves is very unsustainable. This highlights the need for alternative management practices in order to rehabilitate the degraded land, achieve sustainable olive production and eventually securing livelihoods.