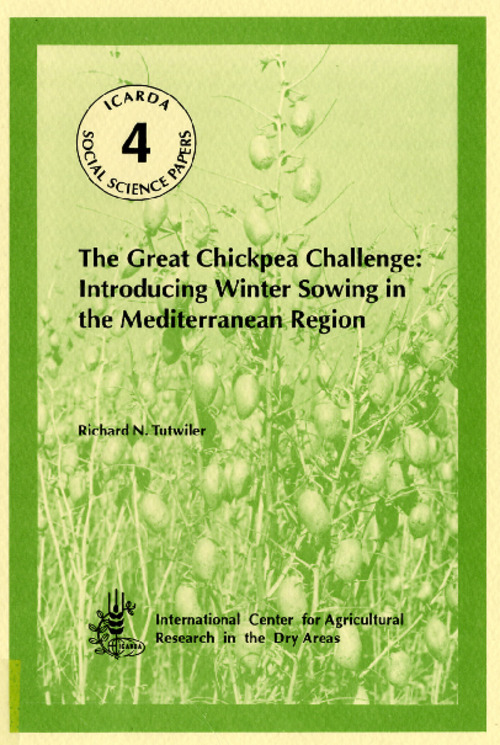 Kabuli chickpea is crucial to the diet of many who live in the West Asia and North Africa (WANA) region. But, while there has been some increase in production over the last few years, most of this has been in Turkey-and it has come from area expansion, not from higher yields. Elsewhere in WANA, production has failed to show a consistent year-on-year increase. Moreover, the area planted to chickpea has fluctuated dramatically from one year to another, with corresponding peaks and troughs in production. This is not good for anybody. It is unhelpful for agricultural and economic planners at the national level. It means an unstable market in chickpae--an important staple; this is bad for consumers. And it is, surely, not good for farmers, who are unable to plan for land use and income. So why do they vary the area they plant to chickpea to this extent? The answer lies in the farming systems of the region. Chickpea is planted in spring, and makes use of residual ground moisture from winter rains. By spring, the farmer will know whether the rain has been sufficient that season, and whether it is worth planting his chickpea crop. Often it is not; hence the wild swings in chickpea area. There is a need both to stabilize production and improve yields of this consumer staple. The challenge referred to in the title of this paper is that of finding a chickpea technology that can improve yield, without exposing farmers--especially poorer ones---to the risks they now avoid through their spring planting decision. The answer could lie with winter-sown chickpea. It has several advantages: it can take more advantage of winter precipitation, resulting in higher yields; there is higher stand at maturity, making mechanical harvesting an option; and the harvest is four to six weeks earlier, away from the cereal harvest, so that labor costs are lower. And, with winter sowing, the decision to plant must be taken before the extent of winter rain is clear. So the area should stabilize, especially if yields are high enough. ICARDA is closely associated with the development of winter chickpea varieties. In 1989 it went into partnership with a number of national programs to assess the acceptability of winter-sown chickpea. This was to be done by establishing a dialogue with farmers so that scientists could better understand exactly what they need from chickpea, and whether the new winter-sown varieties really meet those needs. The paper that follows presents the results of that dialogue in two countries, Morocco and Syria. Overall, they are encouraging; but there is both success and failure. Morocco needs to concentrate on seed size, as its markets discriminate against smaller seeds; consumers like their chickpeas boiled and whole. This was less of a problem in Syria, where people eat chickpea in pureed form (for example, as hummus). Ascochyta-blight resistance is a serious issue in both countries---to the extent that chickpea cultivation of any kind is currently suspended for three years in one Syrian province, in order to control the disease. Cold tolerance is important in Syria, where the winter can be quite severe. Climatic factors are extremely important. And there may be an "information gap". Farmers in Syria thought that some of their neighbors did not adopt winter chickpea technology because they didn't know enough about the necessary weed control and agronomic practices. These can be dealt with. There are now large-seeded, ascochyta-resistant varieties being bred from ICARDA lines, and three have just been released in Spain. And the "information gap" is a matter for extension services. However, in both countries, there was a commercial dimension. It was found that farmers judge success or failure of this technology by net return, not yield as such. It was also clear that winter chickpea must fight for its place in the farming system. Farmers did not compare net returns with spring chickpea alone. Rather, they compared chickpea in general with alternative crops. We have found the answers, or some of them, to the challenge of chickpea production; but farmers face the challenge of the economic system as a whole.