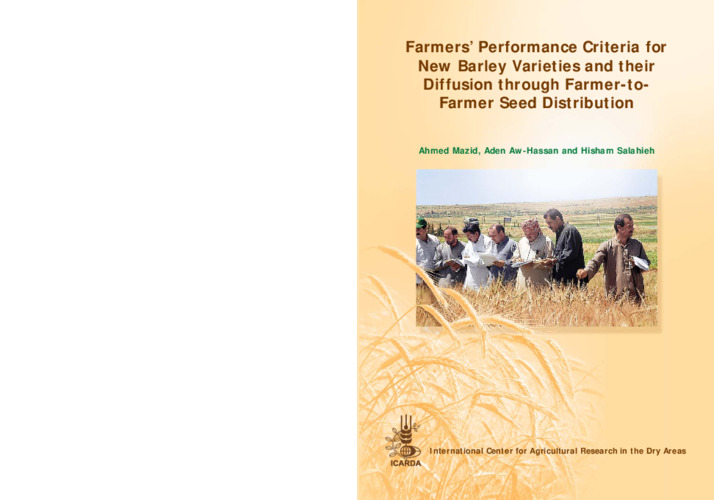 Barley, mainly the two local landraces ‘Arabic Abiad’ and ‘Arabic Aswad’, covers about 1.38 million ha of cultivated land in Syria. The average yield of these landraces is less than 1 t/ha. Barley breeders have developed several promising new varieties with 20% higher yields than local landraces, without the need for additional inputs. For these new varieties to be adopted, the seed should be easily and widely available to farmers. The present study evaluated the role of farmer-to-farmer seed exchange in the distribution of new varieties, by tracing the flow of seed from 52 farmers in 24 villages in Syria. Each farmer was supplied with 100-200 kg of seed of the new barley varieties in the 1994/95 season, and the ensuing distribution traced for five years. The reasons for farmer acceptance or rejection of promising new varieties in different agro-ecological zones, and the extent to which farmerto- farmer distribution of the seed was autonomous, were examined. Most of the farmers involved had collaborated with the ICARDA barley improvement program, either through on-farm trials or by attending field days. One released variety (‘Arta’) and four promising new barley varieties (‘Rihane-03’, ‘Zanbaka’, ‘Tadmor’, and ‘WI2291’) were distributed in the first year. Some farmers selected more than one variety and others chose only the one considered most suitable for their environment. Farmers grew the new varieties in the same way as their local barley, without supervision from ICARDA or national extension agents. The total number of farmers in the study rose to 206 in the last year (1998/99), but those receiving new seeds each year declined after a peak in 1996/97. Growers were divided into two types: ‘new growers’ who grew the varieties for the first time, and ‘adopters’ who grew the varieties more than once. The adoption rate peaked at 75% in the second year and then declined slowly, with no significant difference between agro-ecological zones. In the first year about 30% of growers grew more than one new variety, and some grew up to four. This dropped to only 4% in the last year, suggesting that they tested several before selecting the best new varieties. This suggests that farmers retain some traditional varieties to reduce losses in bad years. Although some farmers discontinued the new varieties, they did not necessarily reject them, since about 35% stopped growing barley altogether, choosing to introduce other options, such as fruit trees, particularly on stony and shallow soils. The average grain yield for the new barley varieties was higher than the local landraces in all agro-ecological zones; the average increase was 60%, and range 53-160%. Farmers’ opinions of new varieties they saw or grew themselves were important since this reflected their experience and judgment. Higher yield was important, and was most frequently cited as the reason for growing ‘Arta’, ‘Rihane-03’, and ‘Tadmor’. The lodging resistance of ‘Rihane-03’, that also had good adaptation to relatively high rainfall, was highly valued. Many farmers in drier areas believed good plant height was important, and that it reduced the risk of crop failure in a dry year. On average, farmers sold 66% of grain as feed, and 4% as seed; they retained 13% to feed sheep, 7% for other uses, and 10% as seed for the next season, therefore, barley is primarily a cash crop in this region. Grain of the new varieties sold at similar prices to landraces as feed, but at higher prices when sold as seed. The high adoption rates emphasized the importance of farmer participation in evaluating new varieties and distributing seed. Farmer-to-farmer seed transfer is a viable option to disseminate new varieties of cereals such as barley, especially when seed companies have not met local demand. Community-level seed technology is needed to guarantee quality and to establish trusted local seed experts as key participators in crop improvement programs, to ensure a constant flow of new germplasm into communities.