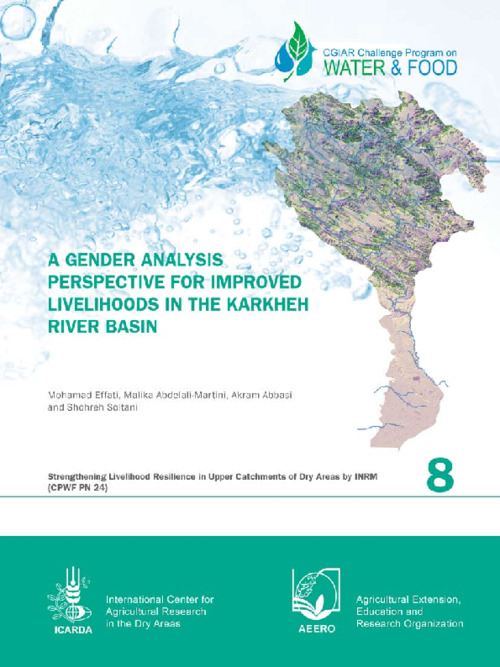 This study on gender and livelihood aims to find new ways of improving the incomes of rural households, based on the role of women in agricultural production and the division of labor in socioeconomic activities between men and women. It targets eight villages in two regions: Merek (Kermanshah Province) and Honam (Lorestan Province), and was carried out through conducting a social survey (quantitative research) and a participatory rural appraisal - PRA- (qualitative research). The results from qualitative and quantitative research were integrated. The study focused on gender roles in agricultural activities; women’s access, control and share of income; and their perceptions and impressions of ways of improving their family livelihood. Theories and overviews on gender and development, gender inequality, feminism, and other issues, are summarized in the study. The study revealed that the roles played by women in the agricultural field, concentrated on seeding, planting, weeding, harvesting and packing; leaving operating machinery and marketing to men. In the field of animal production, women’s roles concentrated on milking, rather than cleaning or feeding. Handicrafts, however, were mainly women’s activities, with very little participation from men. Despite the major role women play in the provision of household income, the patriarchal culture in rural families leaves fewer opportunities for women to take part in decision-making and to have access to resources. To improve their livelihoods, rural families need training (informal) and education (formal) to help establish and develop businesses and income-generating activities using the small savings of local people and credit from the government.