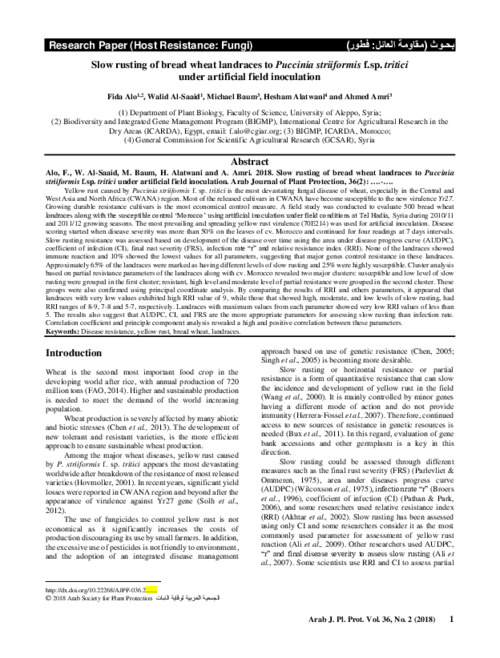 Yellow rust caused by Puccinia striiformis f. sp. tritici is the most devastating fungal disease of wheat, especially in the Central and West Asia and North Africa (CWANA) region. Most of the released cultivars in CWANA have become susceptible to the new virulence Yr27. Growing durable resistance cultivars is the most economical control measure. A field study was conducted to evaluate 500 bread wheat landraces along with the susceptible control ‘Morocco’ using artificial inoculation under field conditions at Tel Hadia, Syria during 2010/11 and 2011/12 growing seasons. The most prevailing and spreading yellow rust virulence (70E214) was used for artificial inoculation. Disease scoring started when disease severity was more than 50% on the leaves of cv. Morocco and continued for four readings at 7 days intervals. Slow rusting resistance was assessed based on development of the disease over time using the area under disease progress curve (AUDPC), coefficient of infection (CI), final rust severity (FRS), infection rate “r” and relative resistance index (RRI). None of the landraces showed immune reaction and 10% showed the lowest values for all parameters, suggesting that major genes control resistance in these landraces. Approximately 65% of the landraces were marked as having different levels of slow rusting and 25% were highly susceptible. Cluster analysis based on partial resistance parameters of the landraces along with cv. Morocco revealed two major clusters: susceptible and low level of slow rusting were grouped in the first cluster; resistant, high level and moderate level of partial resistance were grouped in the second cluster. These groups were also confirmed using principal coordinate analysis. By comparing the results of RRI and others parameters, it appeared that landraces with very low values exhibited high RRI value of 9, while those that showed high, moderate, and low levels of slow rusting, had RRI ranges of 8-9, 7-8 and 5-7, respectively. Landraces with maximum values from each parameter showed very low RRI values of less than 5. The results also suggest that AUDPC, CI, and FRS are the more appropriate parameters for assessing slow rusting than infection rate. Correlation coefficient and principle component analysis revealed a high and positive correlation between these parameters. Keywords: Disease resistance, yellow rust, bread wheat, landraces.