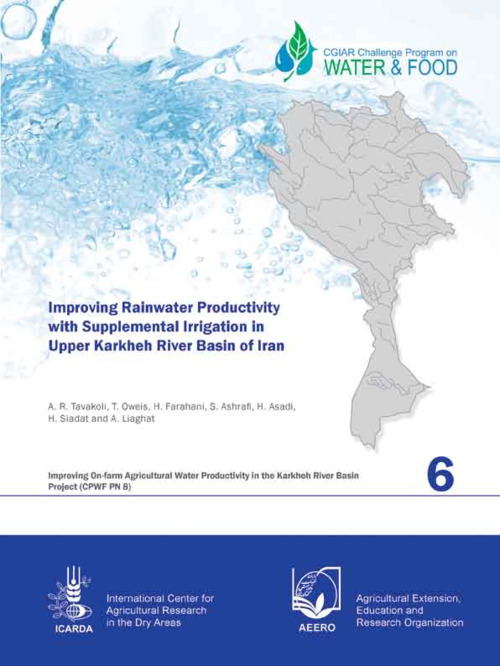 The Karkheh River Basin (KRB) is located in the south-western parts of Iran. Most of the agricultural area in the upper KRB is rainfed and a large part of the region’s agricultural livelihood is based on dryland farming systems. Current water productivity (WP) values for dryland crops range from 0.3 to 0.5 kg m-3. This is in spite of the fact that the upper catchments in the KRB are among the most suitable rainfed zones of the country, with long-term annual precipitation of 300 to 600 mm. Low WP is mainly due to poor distribution of rainfall and poor agronomic management practices To study the options for increasing water productivity in the basin, on-farm trials were conducted during the 2005-08 winter cropping seasons of wheat and barley at multiple farms across two benchmark watersheds of Merek (Kermanshah Province) and Honam (Lorestan Province) in the upper KRB. Under farmers practice at rainfed areas of Merek site, grain production for a local and an advanced barley variety (Sararood1), and a local and improved wheat variety (Azar2), were 1000-2100, 2100-2900, 800-2000, and 2000-2700 kg per ha, respectively. Early planting with the help of a single supplemental irrigation (SI) (about 75-50 mm), at Merek site, increased production to 3500-3700 for barley and 1800-3100 kg per ha for wheat. Similar results were obtained at the Honam site. Rain water productivity (RWP), for wheat, barley, and chickpea ranged from (0.30.5), (0.3-0.6), and (0.1-0.3) kg m-3, respectively. The results of this study showed that a combination of advanced management with a single supplemental irrigation (SI) application at sowing or in the spring (heading to ﬂowering stage) increased total water productivity (TWP), of wheat and barley from a range of 0.3-0.37 kg m-3 to a range of 0.45 -0.71 kg m-3. The irrigation water productivity (IWP), of wheat and barley ranged from 0.55 to 3.62 kg m-3 by using single irrigation at sowing or in the spring. These preliminary results conﬁrm the effective role of supplemental irrigation (SI) and improved agronomic management to enhance rainfed systems productivity. Deﬁcit irrigation (DI) studies showed that, crop water productivity for irrigated wheat in the two sites was higher than under full irrigation. Deﬁcit irrigation not only increased water productivity, but also farmers’ proﬁts. Under pressurized irrigation, total water productivity achieved under a 25 percent water deﬁcit was 1.2 times that achieved under normal irrigation. Besides, a soil water and salt balance model (BUDGET) and a crop water productivity model (AquaCrop) were used to simulate grain and biomass yields, soil moisture content and evapotranspiration of winter wheat sown early with single irrigation scenarios. Experimental data from three growing seasons (2005–2008) were used. The experimental design incorporates Azar2 bread wheat cultivar tested under three treatments: no irrigation at sowing (rainfed), supplemental irrigation (SI) at sowing with 75 mm of water (SI sowing) and irrigation to replenish the total water requirement at 0–90 cm soil proﬁle at spring (about 50 mm of water). Crop input parameters were selected from the model documentation and experimental data. The ﬁrst crop season, ﬁeld experimental data were used for model calibration and the other two crop season data were used for simulation. Results showed that BUDGET (2005) and AquaCrop (2009) were able to simulate well the grain yield reduction, the soil moisture content (SMC) and the evapotranspiration as observed in the ﬁeld experiments. Finally, economical analyses of different treatments for wheat and barley at Honam show that under current market condetions all treatments, except early planting with SI, were non-economical. Accordingly, at Honam, recommended management are in the following ranking: Advanced management (AM) + planting SI, AM + SI spring, and AM + rainfed treatments, respectively. Traditional management with SI or without SI is not recommended. Similar results with spring SI and early planting SI scenarios are recommended at Merek for both wheat and barley.