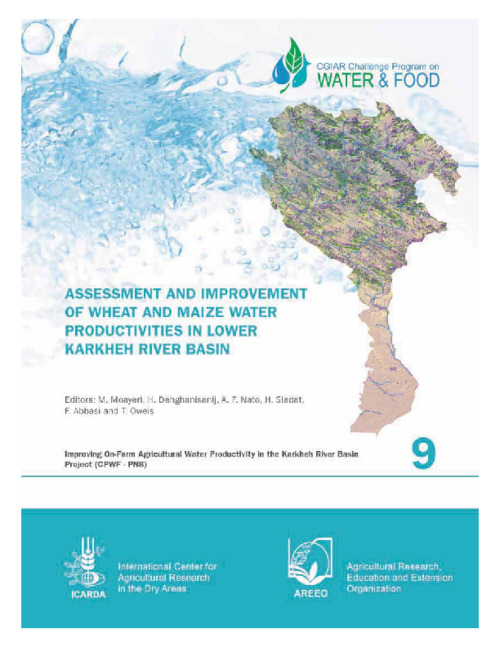 This report on ‘Assessment and Improvement of Wheat and Maize Water Productivity in Lower Karkheh River Basin’ helps researchers and scientists interested in sustainable water development to improve the Water Productivity (WP) of wheat and maize in irrigated lands of the Karkheh dam downstream. The Karkheh River Basin (KRB) is an important agricultural zone, located in the southwest of Iran where two major agricultural production systems prevail, a rainfed system upstream of the newly built Karkheh dam, and a fully irrigated system downstream of the dam. The quality of the river water is good (electrical conductivity (EC) ranging between 0.9 dS/m and 1.7 dS/m, depending on the different seasons and locations along the river). The area is suitable for a wide range of crops, such as wheat, maize, alfalfa, and off-season vegetable crops. The agricultural water resources of the KRB consist of both surface and groundwater. Given the high potential of agricultural land and the possibility of using high quality water from the dams; the rationalization of these areas could have signi cant effects on the economy of the region and the country. The average irrigation ef ciency (the ratio of amount of water used for evapotranspiration to the amount of water diverted from the reservoir) in the lower KRB is 30% and average WP is 0.5 kg/m3 – lower than the country averages of 37% and 0.8 kg/m3 (Keshavarz et al., 2005). Based on the results of this two-year study, the average irrigation and rain WP, water application ef ciency (WAE) and maize crop water productivity (CWP) were 0.38 kg/ m3, 38.6 % and 1.01 kg/m3, respectively. Several practices were examined to improve maize water productivity. Inside-furrow planting (T5) had less water losses compared to the common planting and irrigation method (T1) thus, having a grain yield higher than (T1). It was also found that by the application of a planting and irrigation management method according to (T5), it is possible to reduce water consumption by up to 31%. The (T5) method also caused a signi cant increase in IWP and CWP compared to (T1). In the range of moisture stress of this study, by providing 75 percent of the crop water requirement, the predicted IWP will be 1.3 kg/m3 of water consumed by the plant. Variable alternate furrow irrigation method cannot be recommended due to high irrigation water consumption resulting from water in ux from wet furrows into the neighboring dry furrows. Double row planting on 75 cm ridges (T3) had higher dry matter, grain yield, and IWP compared to the farmers’ practice (T1), but had less IWP than (T5). According to this study, proper surface irrigation management methods and furrow planting could increase irrigation water productivity (IWP) to values 45% higher than the prevailing farmers’ practice i.e. the control treatment. In addition, using drip irrigation increased irrigation water productivity (IWP) by three fold. The observations in the study indicate that the factors behind low WP include: 1) poor farmer knowledge of irrigation management, 2) bad crop management practices, 3) plant nutrient de ciency, 4) high water and soil salinity, 5) large wetland areas, and 6) poor functioning of drainage systems. However, researchers who conducted the study clari ed that by improving research, as well as farm and irrigation management skills, the average irrigation WP for wheat in the studied area would increase from 0.84 kg/m3 to 1.1 kg/m3. The study concludes with recommendations like replacing current corn varieties in the region with high-yielding ones, planting corn seeds at the bottom of the furrows to give a 20% to 30% decrease in the amount of irrigation water consumed, planting at the bottom of the furrows to reduce the amount of irrigation water consumed and to increase irrigation water productivity.