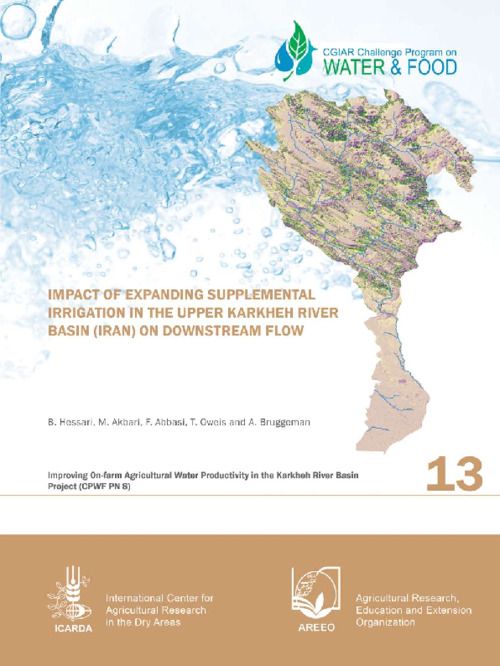 The Karkheh River Basin (KRB) of Iran has a semi-arid to arid climate and suffers from low rainfed agricultural productivity. Supplemental irrigation (SI) is recommended in the upper KRB to increase crops yields and water productivity (WP). However, development activities upstream will certainly affect the water quality and quantity ﬂowing to the Karkheh Dam downstream. In this study, suitable areas for SI are basically rainfed and characterized by the presence of arable soils, non-constraining slopes, agricultural land use, and within a distance from, or an elevation difference with, existing irrigation schemes that does not impose uneconomical costs for water conveyance or pumping. Two methods are examined for targeting suitable lands for SI development. The irrigated areas buffer method and the rivers buffer method. The potential future situation with SI is evaluated by assuming various scenarios at the upstream sub-basins. Current runoff in the upstream KRB is assessed using a surface water balance in a GIS framework. Water demand and new runoff maps were then simulated. A map of potential areas for SI at the upstream sub-basins was prepared using the intersecting layers method within the GIS framework. The results show that 31.4% of the rainfed areas suitable for SI development are located approximately within a 1000 m buffer distance of the irrigated ﬁelds, while the rivers buffer areas cover 46.5% of the suitable rainfed areas. The latter value is assumed to be more realistic for the potential expansion of SI. Four slope priorities in 53 sub-basins and four precipitation scenarios – normal precipitation conditions, normal conditions with an environmental ﬂow consideration, drought conditions, and drought conditions with an environmental ﬂow consideration – are considered in investigating the upstream-downstream interactions. The SI scenarios include full SI (satisfying any deﬁciency of rainfall), SI for early sowing (100 mm in autumn), and two levels of deﬁcit SI strategies (total 150 mm) involving water that would be conveyed from the rivers considered as buffers. A FORTRAN program was written to calculate the water allocations for the upstream subbasins. The results indicate that the amount of water allocated to SI in normal seasons could decrease downstream ﬂow by 15%.Under drought conditions the reduction may amount to 10% of the current ﬂow, if all the potentially suitable areas for SI are developed. Furthermore, for an assessment of the effect of developing SI at the upper Karkheh subbasins on the water quality of the Karkheh River and the Karkheh Dam, a simpliﬁed Water and Salinity Basin Model (WSBM) was developed. The model was calibrated and used to analyze current and past water extractions. Despite the simplicity of the model, the observed and simulated stream ﬂows and salinity are similar, proving that the model could be used for scenario analyses. The ﬁrst scenario was setup to analyze the effect of a single SI of 75 mm in the autumn for about 140,000 ha of rainfed areas. This scenario has no signiﬁcant effect on the water quality of the Karkheh Dam. The results of a second scenario, deﬁned to evaluate the effect of a single SI of 75 mm in the spring for about 200,000 ha of rainfed lands, shows negligible effects compared to the annual ﬂows of the river. The third scenario, a combination of the ﬁrst and second scenarios, produced similar results that indicate a 3.9% increase in water salinity. The last scenario consisted of two SI, each of 75mm, in the spring at the heading and milky stages. In this scenario the water salinity of the river increased from 0.8 to 1.2d S/m, but the Karkheh Dam water salinity increases by 4.1%.