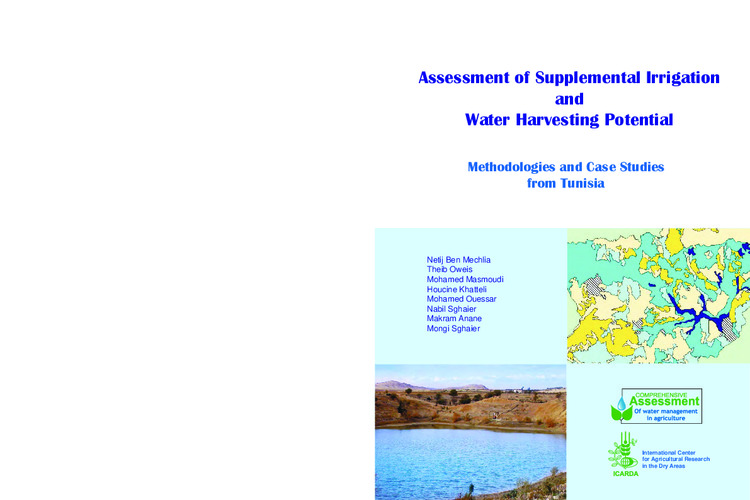 An innovative, low-cost methodology was developed to assess the potential of sites in Tunisia for supplemental irrigation and water harvesting. The methodology, which uses commonly available technologies and information such as remote sensing and a Digital Elevation Model (DEM), was developed and tested using newly constructed hill reservoirs (used to capture surface runoff) and traditional water harvesting systems. Supplemental irrigation potenatial was studied in a pilot area, Oued R’mel in north-eastern Tunisia, Starting with currently operational hill-reservoirs, Aster images and DEM ﬁles were used to map sites suitable for intercepting water along short-lived watercourses. Indices to describe land suitability for irrigation were derived by combining qualitative soil information with DEM data. The outscaling operation from pilot site to the entire country was carried out through several steps, taking into consideration changes in suitability attributes related to changes in rainfall. The end product was an overlay of areas suitable for constructing hillreservoirs on a map of soils receptive to irrigation, on a scale of 1/500000. Traditional water harvesting systems were studied at a pilot watershed, Oum Zessar, in the hilly arid (rainfall < 250 mm) area of southern Tunisia. The study focused on techniques used on steep slopes (Jessour) and piedmonts (Tabia). Slope and size of the watershed (separately) were the main criteria for deﬁning land as suitable for Jessour and Tabia. Through iterative operations, we found optimums for pixels aggregation to set suitability conditions. The analysis also included geo-referenced data on local population in order to identify socioeconomic factors that could determine success. The most important factor was direct involvement of local farmers in water harvesting and use.