Assessment of wheat yield gap in the Mediterranean: Case studies from Morocco, Syria, and Turkey 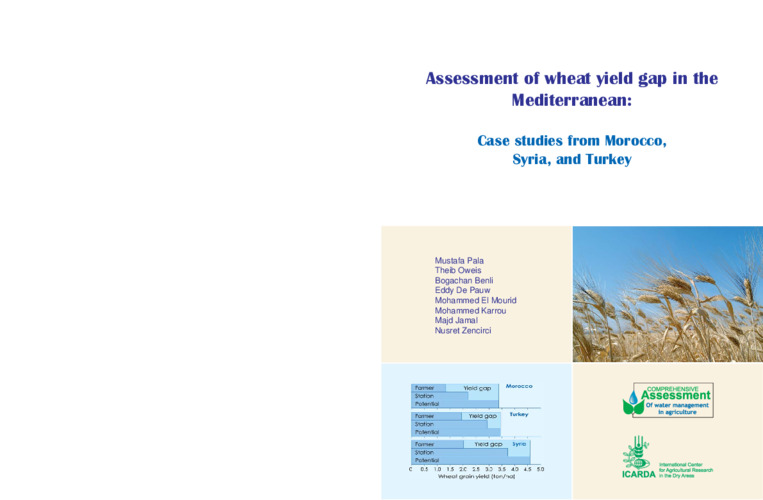 The WANA region has 137 million hectares of arable land of which 35 million hectares are sown to wheat, mostly grown under rainfed conditions with productivity in the range of 0.5–1.5 t/ ha. Wheat products are integral part of Mediterranean diet but there is already a deﬁcit of 8 Mt of wheat which is expected to rise as population grows and people become more afﬂuent. In order to increase the production, there is a need to use improved land and water management practices, together with improved cultivars, to sustainably meet the increasing demand. The climate of WANA is characterized by cool (in lowlands) to cold (in highlands) winters and warm to hot arid summers with conditions differing considerably by topography and by continental (West Asia) or maritime (North Africa) effects. Precipitation is variable in space and time and often deﬁcient in amount. Three zones - Morocco in North Africa for mild low and mild highlands, Syria in west Asia for mild lowland, and Turkey in west Asia for cold highlands were chosen for this study, and were further classiﬁed on the basis of precipitation amounts they receive. It was assumed that the wheat yields of on-farm trials by ICARDA and its national partners, state farms and research stations were higher than those achieved by the farmers mainly because of improved land and water management and superior cultivar selection. Further, CropSyst model was applied to estimate the potential yields in the zones when there was no nutrient stress. At Morocco’s site with rainfall in the range of 250-350 mm, the average (19952004) crop yield on farmer’s croplands (0-5500 kg/ha) was less than average yield measured at research station/on-farm demonstration (0-7300 kg/ha) and simulated potential yield (410-11080 kg/ha). The main reasons identiﬁed for the yield gaps between farmers and research station/onfarm demonstrations were low fertilizer inputs, especially during wet years, and poor soil-water management during dry years. At Syrian site, the average (1994-2005) crop yield on farmer’s croplands (1555-2780 kg/ha) was less than average yield measured at research station (2760-4540 kg/ha) and simulated potential yield (3610-5870 kg/ha). The farmers’ yields from ﬁelds under supplemental irrigation remained low because of poor management of irrigation water, whereas, yields on research stations and on-farm demonstration ﬁelds under supplemental irrigation were higher and varied little from year to year. The yields of rainfed ﬁelds were, however, lower than those under supplemental irrigation. The cultivars used at research station and on-farm demonstration farms (Cham 3 and Cham5) produced higher crop yields than those used by the farmers. The variation in simulated potential yield was attributed to variation in the growing season rainfall. At the Turkish site, the average (1990-2001) crop yield on farmer’s croplands (1675-1890 kg/ha) was less than average yield measured at research station (23653890 kg/ha) and simulated potential yield (26305915 kg/ha). The yields in this zone are lower than those in Morocco and Syria because these are dry marginal rainfed areas with degraded soil nutrient and water resources. Improvement in yields is possible with improved agronomic management practices and cultivars. The yields of coastal areas receiving higher rainfall were higher than dry areas but yields of mountainous zones receiving high rainfall were low because of steep slopes and poor soil, water and nutrient management. The research ﬁnds that wheat yields can be increased by 1.6-2.5 times in Morocco, 1.72.0 times in Syria and 1.5-3.0 times in Turkey. Thus, there is large potential for increase in the wheat yields in the WANA region and improved management practices along with improved varieties and supplemental irrigation can close the wide gaps between farmers’ yields and those achieved at research stations and onfarm demonstration trials. Further improvements will come from improved soil-water and nutrient management practices than those already practiced at the research stations and on-farm demonstrations.