Integrating Expert Knowledge in GIS to Locate Biophysical Potential for Water Harvesting: Methodology and a Case Study for Syria 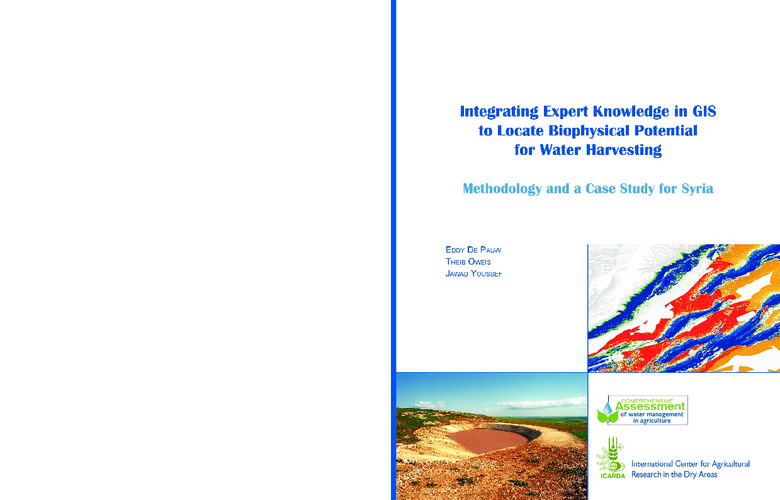 Water harvesting covers various techniques to collect rainwater from natural terrains or modified areas and concentrating it for use on smaller sites or cultivated fields to assure economic crop yields. In micro-catchment systems, the source and target areas are essentially that close to each other that they cannot be at scales larger than the field level, and the storage facility is either the soil’s root zone for immediate or a small reservoir for later use. In macro-catchment systems, run-off water is collected from a relatively large catchment outside a relatively small target area with storage provided by surface structures, such as small farm reservoirs, and subsurface structures, such as cisterns, or the soil in the target area itself. In Syria water harvesting is not much adopted by farmers. One of the reasons is that the agricultural research and extension support services in Syria lack specific and systematic knowledge on potential areas and suitable locations for water harvesting. The objective of this study is to provide a rapid GIS-based analytical technique to assess suitability for various water harvesting systems in Syria, with the ultimate objective to adapt the technique for use at the level of the CWANA region. The assessment was undertaken by matching in a geographical information system with simple biophysical information, systematically available at country level, to the broad requirements of the specified water harvesting systems. The systems evaluated include 13 micro-catchment systems, based on combinations of six techniques and three crop groups, and one generalized macro-catchment system. The environmental criteria for suitability were based on expert guidelines for selecting water-harvesting techniques in the drier environments. They included precipitation, slope, soil depth, texture, and salinity, as well as land use/land cover and geological substratum. The dataset included interpolated surfaces of mean annual precipitation, a high-resolution digital elevation model, a soil map of Syria, a land use/land cover map of Syria, and a geological map of Syria. The evaluation had two stages: scoring of the land attributes according to individual criteria, followed by the combination of the individual scores in a multi-criteria evaluation. Fuzzy membership functions were used to evaluate suitability for continuous variables, such as precipitation and slope. For these, the boundary between ‘suitable’ and ‘unsuitable’ forms by nature a continuum. The functions are fully defined by their shape (either sigmoid or linear) and inflection point positions. Other relevant factors, such as soils, land use or geological materials, could at the national level only be described as qualitative constraints. In addition, for these datasets, it is quite normal that the pixels contain mixtures with different properties. When several constraints occur, it becomes very difficult to estimate the total proportion of the pixel that is affected by one constraint or another. Monte-Carlo simulation of sub-pixel constraint overlap indicated that a reasonable approximation of total proportion of a pixel affected by one constraint or another could be obtained by taking the sum of the estimated proportions of the individual constraints. The individual factors were then scored on a common scale (0-100) and combined through the Maximum Limitation Method (MLM) as a special case of Boolean overlay. To identify areas suitable for macro-catchment systems, two separate assessments were undertaken – the first one to evaluate suitability to serve as a catchment, and the second one to evaluate suitability as a target area, with the additional constraint that both areas should be within a certain distance of each other. The evaluation for catchment suitability included fuzzy membership function for precipitation and slope, in which the scores were adjusted by taking into consideration the soil hydrological properties. The results of the suitability assessments are presented as a set of 14 maps and summarized at provincial and district levels in the form of tables.