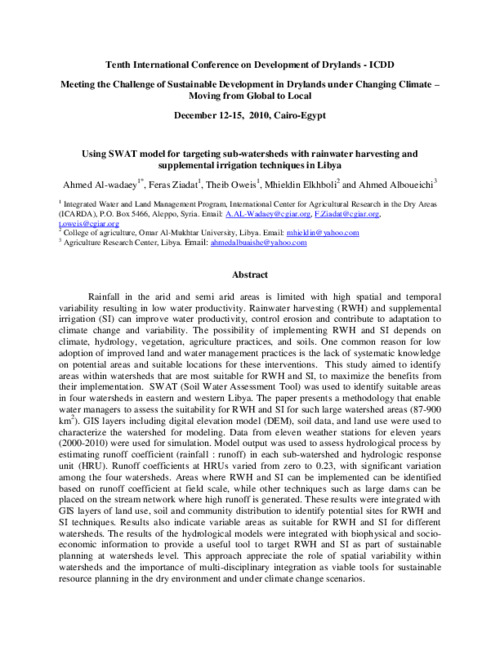 Rainfall in the arid and semi arid areas is limited with high spatial and temporal variability resulting in low water productivity. Rainwater harvesting (RWH) and supplemental irrigation (SI) can improve water productivity, control erosion and contribute to adaptation to climate change and variability. The possibility of implementing RWH and SI depends on climate, hydrology, vegetation, agriculture practices, and soils. One common reason for low adoption of improved land and water management practices is the lack of systematic knowledge on potential areas and suitable locations for these interventions. This study aimed to identify areas within watersheds that are most suitable for RWH and SI, to maximize the benefits from their implementation. SWAT (Soil Water Assessment Tool) was used to identify suitable areas in four watersheds in eastern and western Libya. The paper presents a methodology that enable water managers to assess the suitability for RWH and SI for such large watershed areas (87-900 km2). GIS layers including digital elevation model (DEM), soil data, and land use were used to characterize the watershed for modeling. Data from eleven weather stations for eleven years (2000-2010) were used for simulation. Model output was used to assess hydrological process by estimating runoff coefficient (rainfall : runoff) in each sub-watershed and hydrologic response unit (HRU). Runoff coefficients at HRUs varied from zero to 0.23, with significant variation among the four watersheds. Areas where RWH and SI can be implemented can be identified based on runoff coefficient at field scale, while other techniques such as large dams can be placed on the stream network where high runoff is generated. These results were integrated with GIS layers of land use, soil and community distribution to identify potential sites for RWH and SI techniques. Results also indicate variable areas as suitable for RWH and SI for different watersheds. The results of the hydrological models were integrated with biophysical and socioeconomic information to provide a useful tool to target RWH and SI as part of sustainable planning at watersheds level. This approach appreciate the role of spatial variability within watersheds and the importance of multi-disciplinary integration as viable tools for sustainable resource planning in the dry environment and under climate change scenarios.