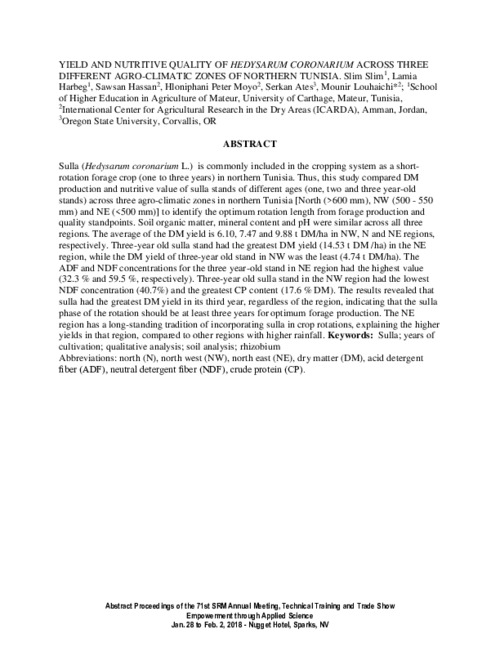 Sulla (Hedysarum coronarium L.) is commonly included in the cropping system as a short-rotation forage crop (one to three years) in northern Tunisia. Thus, this study compared DM production and nutritive value of sulla stands of different ages (one, two and three year-old stands) across three agro-climatic zones in northern Tunisia [North (>600 mm), NW (500 - 550 mm) and NE (<500 mm)] to identify the optimum rotation length from forage production and quality standpoints. Soil organic matter, mineral content and pH were similar across all three regions. The average of the DM yield is 6.10, 7.47 and 9.88 t DM/ha in NW, N and NE regions, respectively. Three-year old sulla stand had the greatest DM yield (14.53 t DM /ha) in the NE region, while the DM yield of three-year old stand in NW was the least (4.74 t DM/ha). The ADF and NDF concentrations for the three year-old stand in NE region had the highest value (32.3 % and 59.5 %, respectively). Three-year old sulla stand in the NW region had the lowest NDF concentration (40.7%) and the greatest CP content (17.6 % DM). The results revealed that sulla had the greatest DM yield in its third year, regardless of the region, indicating that the sulla phase of the rotation should be at least three years for optimum forage production. The NE region has a long-standing tradition of incorporating sulla in crop rotations, explaining the higher yields in that region, compared to other regions with higher rainfall.