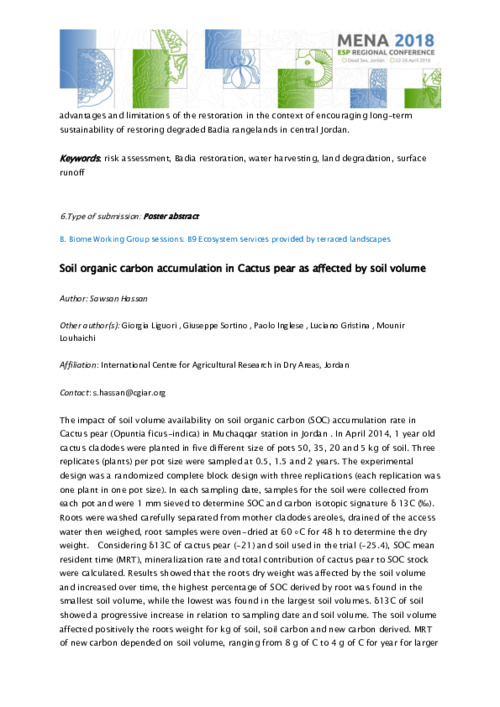 The impact of soil volume availability on soil organic carbon (SOC) accumulation rate in Cactus pear (Opuntia ficus-indica) in Muchaqqar station in Jordan . In April 2014, 1 year old cactus cladodes were planted in five different size of pots 50, 35, 20 and 5 kg of soil. Three replicates (plants) per pot size were sampled at 0.5, 1.5 and 2 years. The experimental design was a randomized complete block design with three replications (each replication was one plant in one pot size). In each sampling date, samples for the soil were collected from each pot and were 1 mm sieved to determine SOC and carbon isotopic signature δ 13C (‰). Roots were washed carefully separated from mother cladodes areoles, drained of the access water then weighed, root samples were oven-dried at 60 ◦C for 48 h to determine the dry weight. Considering δ13C of cactus pear (-21) and soil used in the trial (-25.4), SOC mean resident time (MRT), mineralization rate and total contribution of cactus pear to SOC stock were calculated. Results showed that the roots dry weight was affected by the soil volume and increased over time, the highest percentage of SOC derived by root was found in the smallest soil volume, while the lowest was found in the largest soil volumes. δ13C of soil showed a progressive increase in relation to sampling date and soil volume. The soil volume affected positively the roots weight for kg of soil, soil carbon and new carbon derived. MRT of new carbon depended on soil volume, ranging from 8 g of C to 4 g of C for year for larger and smaller soil volume respectively. In conclusion, the soil organic carbon accumulation in cactus pear was affected by soil volume.