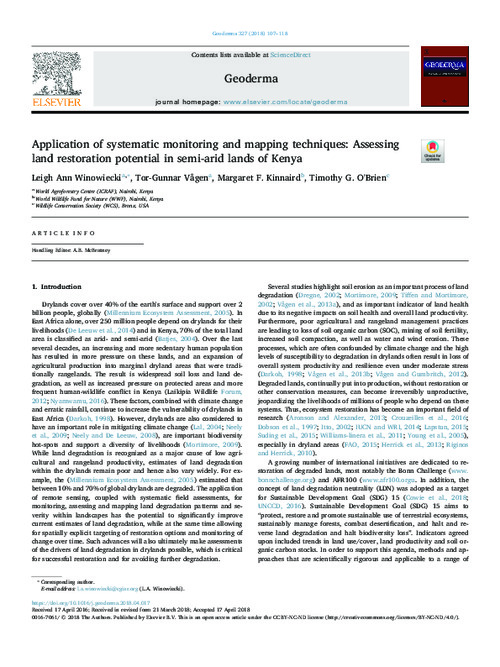 Drylands cover over 40% of the earth's surface and support over 2 billion people, globally (Millennium Ecosystem Assessment, 2005). In East Africa alone, over 250 million people depend on drylands for their livelihoods (De Leeuw et al., 2014) and in Kenya, 70% of the total land area is classiﬁed as arid- and semi-arid (Batjes, 2004). Over the last several decades, an increasing and more sedentary human population has resulted in more pressure on these lands, and an expansion of agricultural production into marginal dryland areas that were traditionally rangelands. The result is widespread soil loss and land degradation, as well as increased pressure on protected areas and more frequent human-wildlife conﬂict in Kenya (Laikipia Wildlife Forum, 2012;Nyamwamu,2016).Thesefactors,combinedwithclimate change and erratic rainfall, continue to increase the vulnerability ofdrylands in East Africa (Darkoh, 1998). However, drylands are also considered to have an important role in mitigating climate change (Lal, 2004; Neely et al., 2009; Neely and De Leeuw, 2008), are important biodiversity hot-spots and support a diversity of livelihoods (Mortimore, 2009). While land degradation is recognized as a major cause of low agricultural and rangeland productivity, estimates of land degradation within the drylands remain poor and hence also vary widely. For example, the (Millennium Ecosystem Assessment, 2005) estimated that between10%and70%ofglobaldrylands aredegraded.Theapplication of remote sensing, coupled with systematic ﬁeld assessments, for monitoring, assessing and mapping land degradation patterns and severity within landscapes has the potential to signiﬁcantly improve current estimates of land degradation, while at the same time allowing for spatially explicit targeting of restoration options and monitoring of change over time. Such advances will also ultimately make assessments of the drivers of land degradation in drylands possible, which is critical for successful restoration and for avoiding further degradation.