Genetic and transcriptional variations in NRAMP‑2 and OPAQUE1 genes are associated with salt stress response in wheat. 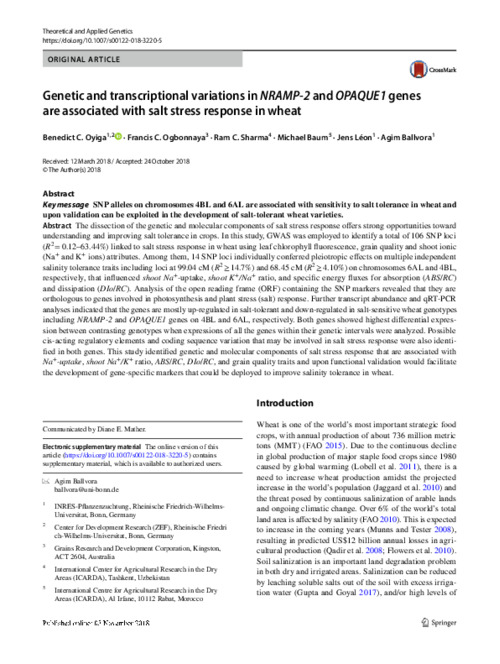 The dissection of the genetic and molecular components of salt stress response offers strong opportunities toward understanding and improving salt tolerance in crops. In this study, GWAS was employed to identify a total of 106 SNP loci (R2 = 0.12–63.44%) linked to salt stress response in wheat using leaf chlorophyll fluorescence, grain quality and shoot ionic (Na+ and K+ ions) attributes. Among them, 14 SNP loci individually conferred pleiotropic effects on multiple independent salinity tolerance traits including loci at 99.04 cM (R2 ≥ 14.7%) and 68.45 cM (R2 ≥ 4.10%) on chromosomes 6AL and 4BL, respectively, that influenced shoot Na+-uptake, shoot K+/Na+ ratio, and specific energy fluxes for absorption (ABS/RC) and dissipation (DIo/RC). Analysis of the open reading frame (ORF) containing the SNP markers revealed that they are orthologous to genes involved in photosynthesis and plant stress (salt) response. Further transcript abundance and qRT-PCR analyses indicated that the genes are mostly up-regulated in salt-tolerant and down-regulated in salt-sensitive wheat genotypes including NRAMP-2 and OPAQUE1 genes on 4BL and 6AL, respectively. Both genes showed highest differential expression between contrasting genotypes when expressions of all the genes within their genetic intervals were analyzed. Possible cis-acting regulatory elements and coding sequence variation that may be involved in salt stress response were also identified in both genes. This study identified genetic and molecular components of salt stress response that are associated with Na+-uptake, shoot Na+/K+ ratio, ABS/RC, DIo/RC, and grain quality traits and upon functional validation would facilitate the development of gene-specific markers that could be deployed to improve salinity tolerance in wheat.