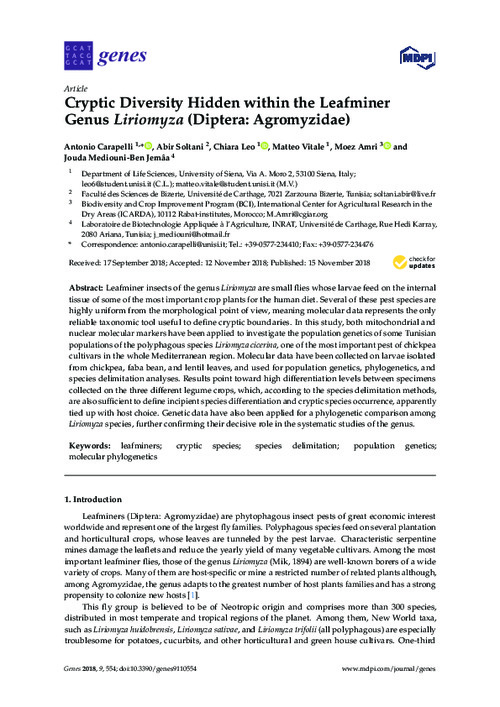 Leafminer insects of the genus Liriomyza are small ﬂies whose larvae feed on the internal tissue of some of the most important crop plants for the human diet. Several of these pest species are highly uniform from the morphological point of view, meaning molecular data represents the only reliable taxonomic tool useful to deﬁne cryptic boundaries. In this study, both mitochondrial and nuclear molecular markers have been applied to investigate the population genetics of some Tunisian populations of the polyphagous species Liriomyzacicerina, one of the most important pest of chickpea cultivars in the whole Mediterranean region. Molecular data have been collected on larvae isolated from chickpea, faba bean, and lentil leaves, and used for population genetics, phylogenetics, and species delimitation analyses. Results point toward high differentiation levels between specimens collected on the three different legume crops, which, according to the species delimitation methods, are also sufﬁcient to deﬁne incipient species differentiation and cryptic species occurrence,apparently tied up with host choice. Genetic data have also been applied for a phylogenetic comparison among Liriomyza species, further conﬁrming their decisive role in the systematic studies of the genus.