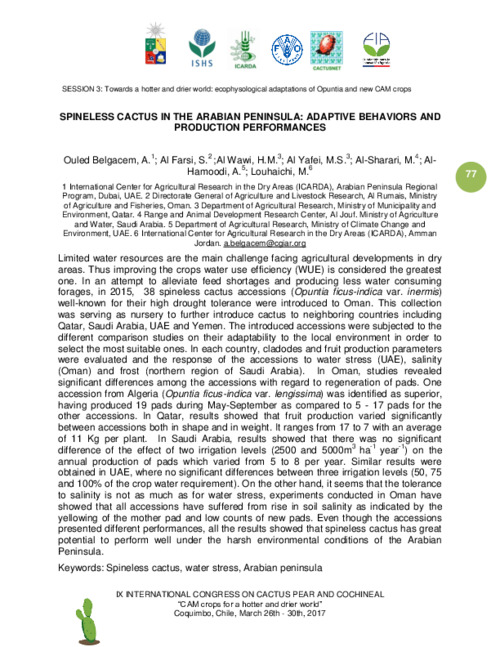 Limited water resources are the main challenge facing agricultural developments in dry areas. Thus improving the crops water use efficiency (WUE) is considered the greatest one. In an attempt to alleviate feed shortages and producing less water consuming forages, in 2015, 38 spineless cactus accessions (Opuntia ficus-indica var. inermis) well-known for their high drought tolerance were introduced to Oman. This collection was serving as nursery to further introduce cactus to neighboring countries including Qatar, Saudi Arabia, UAE and Yemen. The introduced accessions were subjected to the different comparison studies on their adaptability to the local environment in order to select the most suitable ones. In each country, cladodes and fruit production parameters were evaluated and the response of the accessions to water stress (UAE), salinity (Oman) and frost (northern region of Saudi Arabia). In Oman, studies revealed significant differences among the accessions with regard to regeneration of pads. One accession from Algeria (Opuntia ficus-indica var. lengissima) was identified as superior, having produced 19 pads during May-September as compared to 5 - 17 pads for the other accessions. In Qatar, results showed that fruit production varied significantly between accessions both in shape and in weight. It ranges from 17 to 7 with an average of 11 Kg per plant. In Saudi Arabia, results showed that there was no significant difference of the effect of two irrigation levels (2500 and 5000m3 ha-1 year-1) on the annual production of pads which varied from 5 to 8 per year. Similar results were obtained in UAE, where no significant differences between three irrigation levels (50, 75 and 100% of the crop water requirement). On the other hand, it seems that the tolerance to salinity is not as much as for water stress, experiments conducted in Oman have showed that all accessions have suffered from rise in soil salinity as indicated by the yellowing of the mother pad and low counts of new pads. Even though the accessions presented different performances, all the results showed that spineless cactus has great potential to perform well under the harsh environmental conditions of the Arabian Peninsula.