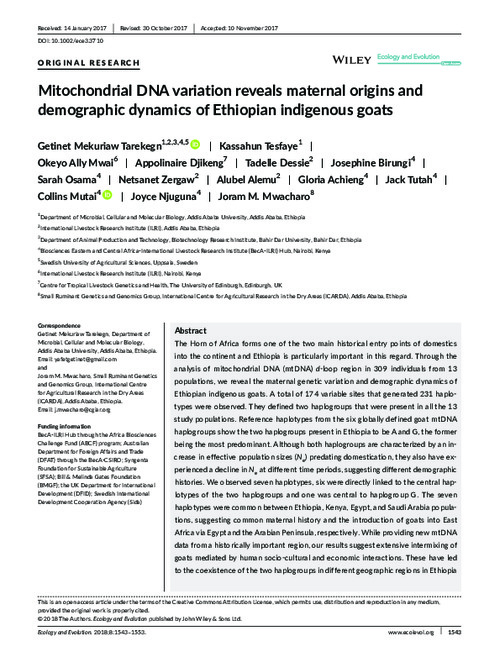 The Horn of Africa forms one of the two main historical entry points of domestics into the continent and Ethiopia is particularly important in this regard. Through the analysis of mitochondrial DNA (mtDNA) d-loop region in 309 individuals from 13 populations, we reveal the maternal genetic variation and demographic dynamics of Ethiopian indigenous goats. A total of 174 variable sites that generated 231 haplotypes were observed. They defined two haplogroups that were present in all the 13 study populations. Reference haplotypes from the six globally defined goat mtDNA haplogroups show the two haplogroups present in Ethiopia to be A and G, the former being the most predominant. Although both haplogroups are characterized by an increase in effective population sizes (Ne) predating domestication, they also have experienced a decline in Ne at different time periods, suggesting different demographic histories. We observed seven haplotypes, six were directly linked to the central haplotypes of the two haplogroups and one was central to haplogroup G. The seven haplotypes were common between Ethiopia, Kenya, Egypt, and Saudi Arabia populations, suggesting common maternal history and the introduction of goats into East Africa via Egypt and the Arabian Peninsula, respectively. While providing new mtDNA data from a historically important region, our results suggest extensive intermixing of goats mediated by human socio-cultural and economic interactions. These have led to the coexistence of the two haplogroups in different geographic regions in Ethiopia