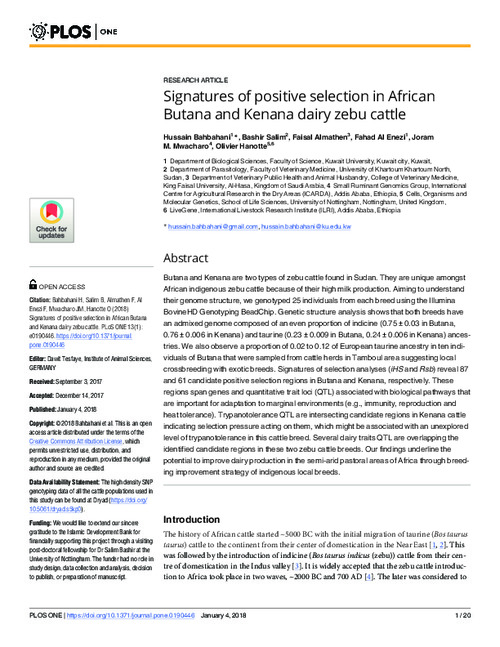 Butana and Kenana are two types of zebu cattle found in Sudan. They are unique amongst African indigenous zebu cattle because of their high milk production. Aiming to understand their genome structure, we genotyped 25 individuals from each breed using the Illumina BovineHD Genotyping BeadChip. Genetic structure analysis shows that both breeds have an admixed genome composed of an even proportion of indicine (0.75 ± 0.03 in Butana, 0.76 ± 0.006 in Kenana) and taurine (0.23 ± 0.009 in Butana, 0.24 ± 0.006 in Kenana) ancestries. We also observe a proportion of 0.02 to 0.12 of European taurine ancestry in ten individuals of Butana that were sampled from cattle herds in Tamboul area suggesting local crossbreeding with exotic breeds. Signatures of selection analyses (iHS and Rsb) reveal 87 and 61 candidate positive selection regions in Butana and Kenana, respectively. These regions span genes and quantitative trait loci (QTL) associated with biological pathways that are important for adaptation to marginal environments (e.g., immunity, reproduction and heat tolerance). Trypanotolerance QTL are intersecting candidate regions in Kenana cattle indicating selection pressure acting on them, which might be associated with an unexplored level of trypanotolerance in this cattle breed. Several dairy traits QTL are overlapping the identified candidate regions in these two zebu cattle breeds. Our findings underline the potential to improve dairy production in the semi-arid pastoral areas of Africa through breeding improvement strategy of indigenous local breeds.