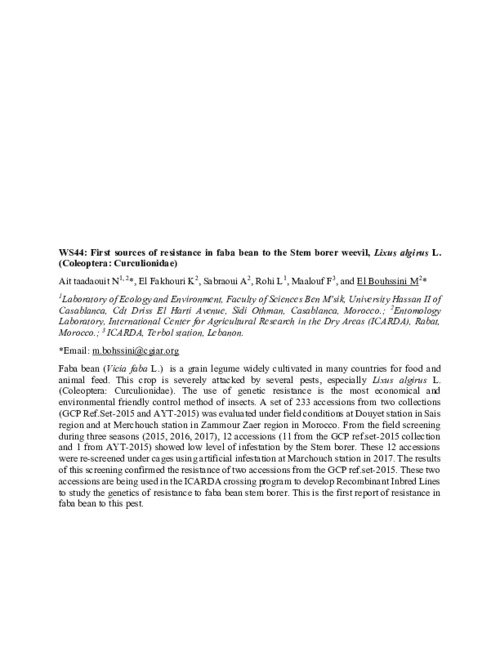 Faba bean (Vicia faba L.) is a grain legume widely cultivated in many countries for food and animal feed. This crop is severely attacked by several pests, especially Lixus algirus L. (Coleoptera: Curculionidae). The use of genetic resistance is the most economical and environmental friendly control method of insects. A set of 233 accessions from two collections (GCP Ref.Set-2015 and AYT-2015) was evaluated under field conditions at Douyet station in Sais region and at Merchouch station in Zammour Zaer region in Morocco. From the field screening during three seasons (2015, 2016, 2017), 12 accessions (11 from the GCP ref.set-2015 collection and 1 from AYT-2015) showed low level of infestation by the Stem borer. These 12 accessions were re-screened under cages using artificial infestation at Marchouch station in 2017. The results of this screening confirmed the resistance of two accessions from the GCP ref.set-2015. These two accessions are being used in the ICARDA crossing program to develop Recombinant Inbred Lines to study the genetics of resistance to faba bean stem borer. This is the first report of resistance in faba bean to this pest.