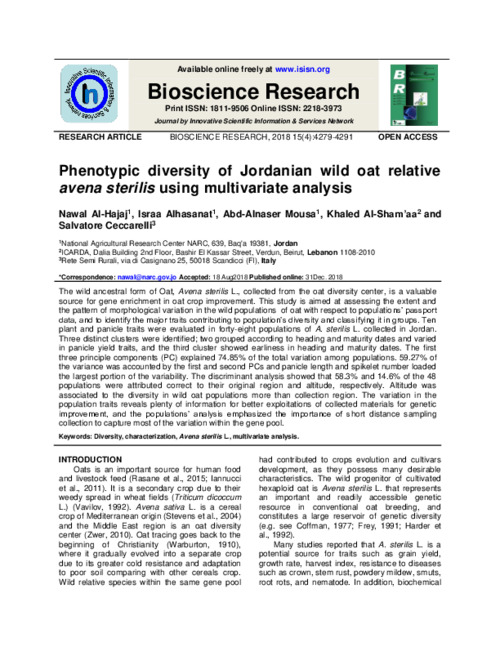 The wild ancestral form of Oat, Avena sterilis L., collected from the oat diversity center, is a valuable source for gene enrichment in oat crop improvement. This study is aimed at assessing the extent and the pattern of morphological variation in the wild populations of oat with respect to populations’ passport data, and to identify the major traits contributing to population’s diversity and classifying it in groups. Ten plant and panicle traits were evaluated in forty-eight populations of A. sterilis L. collected in Jordan. Three distinct clusters were identified; two grouped according to heading and maturity dates and varied in panicle yield traits, and the third cluster showed earliness in heading and maturity dates. The first three principle components (PC) explained 74.85% of the total variation among populations. 59.27% of the variance was accounted by the first and second PCs and panicle length and spikelet number loaded the largest portion of the variability. The discriminant analysis showed that 58.3% and 14.6% of the 48 populations were attributed correct to their original region and altitude, respectively. Altitude was associated to the diversity in wild oat populations more than collection region. The variation in the population traits reveals plenty of information for better exploitations of collected materials for genetic improvement, and the populations’ analysis emphasized the importance of short distance sampling collection to capture most of the variation within the gene pool.