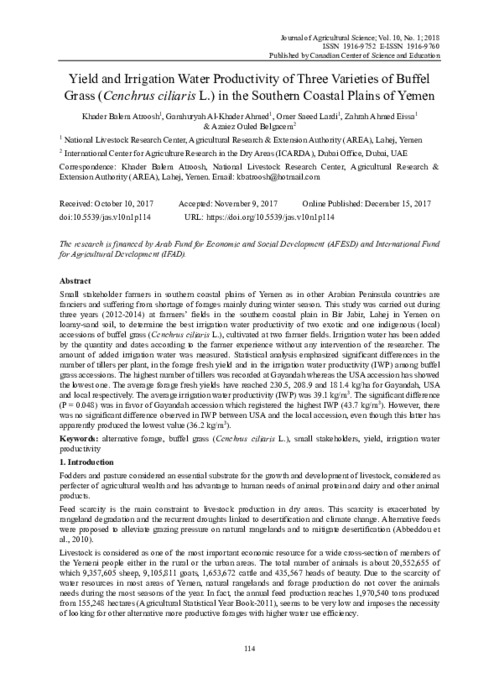 Small stakeholder farmers in southern coastal plains of Yemen as in other Arabian Peninsula countries are fanciers and suffering from shortage of forages mainly during winter season. This study was carried out during three years (2012-2014) at farmers’ fields in the southern coastal plain in Bir Jabir, Lahej in Yemen on loamy-sand soil, to determine the best irrigation water productivity of two exotic and one indigenous (local) accessions of buffel grass (Cenchrus ciliaris L.), cultivated at two farmer fields. Irrigation water has been added by the quantity and dates according to the farmer experience without any intervention of the researcher. The amount of added irrigation water was measured. Statistical analysis emphasized significant differences in the number of tillers per plant, in the forage fresh yield and in the irrigation water productivity (IWP) among buffel grass accessions. The highest number of tillers was recorded at Gayandah whereas the USA accession has showed the lowest one. The average forage fresh yields have reached 230.5, 208.9 and 181.4 kg/ha for Gayandah, USA and local respectively. The average irrigation water productivity (IWP) was 39.1 kg/m3. The significant difference (P = 0.048) was in favor of Gayandah accession which registered the highest IWP (43.7 kg/m3). However, there was no significant difference observed in IWP between USA and the local accession, even though this latter has apparently produced the lowest value (36.2 kg/m3).