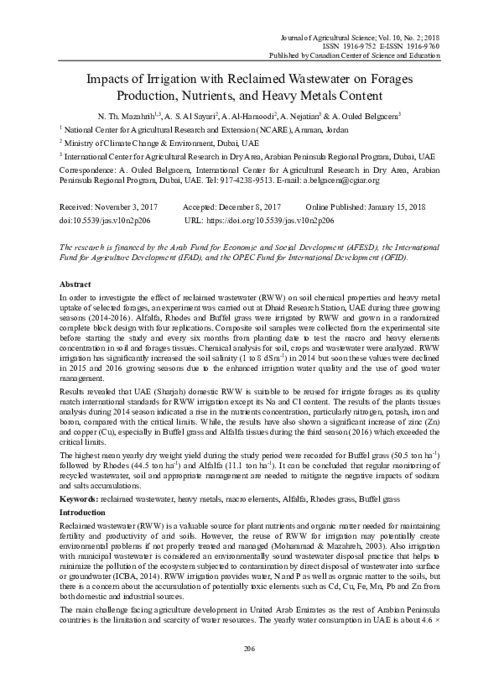 In order to investigate the effect of reclaimed wastewater (RWW) on soil chemical properties and heavy metal uptake of selected forages, an experiment was carried out at Dhaid Research Station, UAE during three growing seasons (2014-2016). Alfalfa, Rhodes and Buffel grass were irrigated by RWW and grown in a randomized complete block design with four replications. Composite soil samples were collected from the experimental site before starting the study and every six months from planting date to test the macro and heavy elements concentration in soil and forages tissues. Chemical analysis for soil, crops and wastewater were analyzed. RWW irrigation has significantly increased the soil salinity (1 to 8 dSm-1) in 2014 but soon these values were declined in 2015 and 2016 growing seasons due to the enhanced irrigation water quality and the use of good water management. Results revealed that UAE (Sharjah) domestic RWW is suitable to be reused for irrigate forages as its quality match international standards for RWW irrigation except its Na and Cl content. The results of the plants tissues analysis during 2014 season indicated a rise in the nutrients concentration, particularly nitrogen, potash, iron and boron, compared with the critical limits. While, the results have also shown a significant increase of zinc (Zn) and copper (Cu), especially in Buffel grass and Alfalfa tissues during the third season (2016) which exceeded the critical limits. The highest mean yearly dry weight yield during the study period were recorded for Buffel grass (50.5 ton ha-1) followed by Rhodes (44.5 ton ha-1) and Alfalfa (11.1 ton ha-1). It can be concluded that regular monitoring of recycled wastewater, soil and appropriate management are needed to mitigate the negative impacts of sodium and salts accumulations.