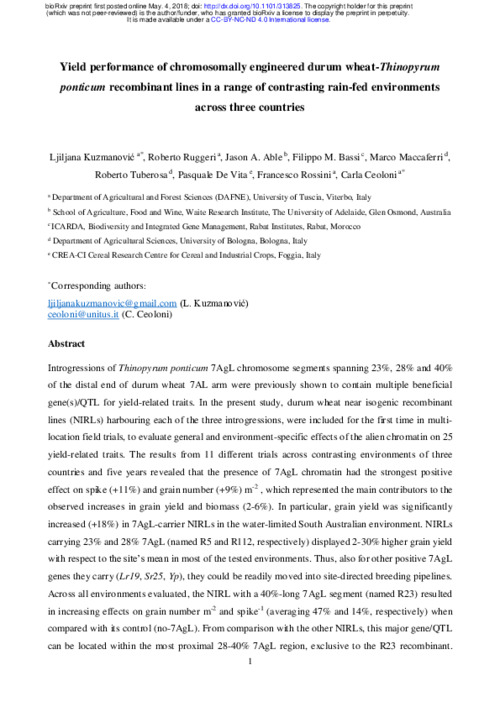 Introgressions of Thinopyrum ponticum 7AgL chromosome segments, spanning 23%, 28% and 40% of the distal end of durum wheat 7AL arm, were previously shown to contain multiple beneficial gene(s)/QTL for yield-related traits, in addition to effective disease resistance (Lr19, Sr25) and quality (Yp) genes. In the present study, durum wheat near isogenic recombinant lines (NIRLs), harbouring each of the three introgressions, were included for the first time in multi-location field trials, to evaluate general and environment-specific effects of the alien chromatin on 26 yield-related traits. Results from nine different trials across contrasting environments of Italy, Morocco and South Australia over four years revealed that the overall impact of 7AgL introgressions into the tetraploid wheat background did not incur, except in one environment, a major yield penalty. The effect of the three 7AgL segments on individual yield-contributing traits resulted in significant increases of biomass m−2 (+9%), spike number m−2 (+13%), grain number m−2 (+11%) and spikelet-1 (+8%), as well as a significant decrease in grain weight (−8%). When the separate NIRLs were analysed, each of the three 7AgL segments were associated with specific yield component variation. The effects of the 40%-long segment proved to be the most stably expressed across environments and involved significant increases of spike and grain number m−2 (13% and 15%, respectively), grain number spike-1 (10%) and spike fertility index (46%), though accompanied by a significant decrease in thousand grain weight (−23%). In spite of this trade-off between grain number and grain weight, their interplay was such that in four trials, including drier environments, a grain yield advantage was observed. This evidence, and comparison with the two other NIRLs, substantiates the hypothesized existence of major gene(s)/QTL for grain number in the most proximal 28–40% 7AgL region, exclusive to the 40%-long 7AgL introgression. The present study represents an important validation of the use of chromosomally engineered genetic stocks for durum wheat improvement, targeting not only disease resistance and quality traits but also relevant yield components.