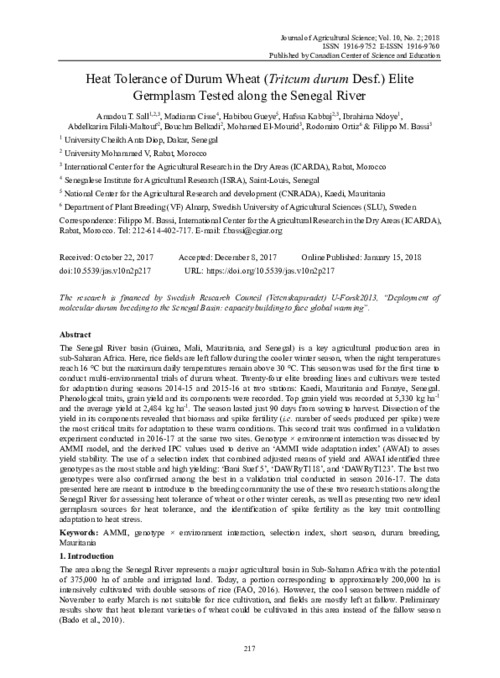 The Senegal River basin (Guinea, Mali, Mauritania, and Senegal) is a key agricultural production area in sub-Saharan Africa. Here, rice fields are left fallow during the cooler winter season, when the night temperatures reach 16 °C but the maximum daily temperatures remain above 30 °C. This season was used for the first time to conduct multi-environmental trials of durum wheat. Twenty-four elite breeding lines and cultivars were testedfor adaptation during seasons 2014-15 and 2015-16 at two stations: Kaedi, Mauritania and Fanaye, Senegal. Phenological traits, grain yield and its components were recorded. Top grain yield was recorded at 5,330 kg ha-1 and the average yield at 2,484 kg ha-1. The season lasted just 90 days from sowing to harvest. Dissection of the yield in its components revealed that biomass and spike fertility (i.e. number of seeds produced per spike) were the most critical traits for adaptation to these warm conditions. This second trait was confirmed in a validation experiment conducted in 2016-17 at the same two sites. Genotype × environment interaction was dissected by AMMI model, and the derived IPC values used to derive an ‘AMMI wide adaptation index’ (AWAI) to assesyield stability. The use of a selection index that combined adjusted means of yield and AWAI identified three genotypes as the most stable and high yielding: ‘Bani Suef 5’, ‘DAWRyT118’, and ‘DAWRyT123’. The last two genotypes were also confirmed among the best in a validation trial conducted in season 2016-17. The data presented here are meant to introduce to the breeding community the use of these two research stations along the Senegal River for assessing heat tolerance of wheat or other winter cereals, as well as presenting two new ideal germplasm sources for heat tolerance, and the identification of spike fertility as the key trait controlling adaptation to heat stress.