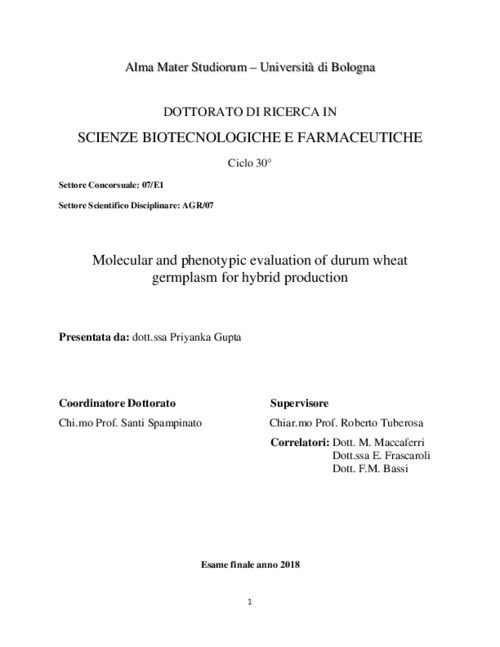 Global food security is faced with serious challenges including population growth and changing climate. To cope with these challenges a paradigm shift is required to ensure sufficient and sustainable crop production. Hybrid technology is one of the strategic solutions for crops including durum wheat. To translate hybrid technology in durum wheat, an understanding of heterotic behavior is required. The present study aims at generating the basic knowledge of hybrid technology and examines the magnitude of heterosis for yield and yield components through evaluation of eight parents along with 28 F1 hybrids (half diallel) from University of Bologna and 25 F1 and 10 parents (NC II design) from ICARDA, Morocco. The hybrids along with their parents were evaluated in the field-experiment carried out in Bologna, precision phenotyping platform (Lemnatec) at different levels of water stress in Metaponto and in nearfield condition via a basket method in Rabat to assess agronomic, physiological and root traits. The F1 hybrids were evaluated based on mid and best parent values as well as general and specific combining ability effects and water stress tolerance index (WSTI). The results showed >20% of mid parent heterosis, indicating the scope for exploitation of heterosis in durum wheat. Valnova x Miki was the best hybrid combination in both experiments followed by Karim x Valnova and Karim x Morocco in field while, Karim x Svevo and Iride x Miki in glasshouse for hybrid production. Based on the WSTI, three F1 hybrids (Valnova x Miki, Iride x Miki and Svevo x Miki) and one parent (Svevo) were identified as drought tolerant. In general, grain yield varied appreciably among crosses in each environment. These results suggest that hybrids in general do better under water stress environment but specific hybrid combinations need to be developed to realize the stably higher performance under drought prone environments. Another aspect of hybrid technology is to ensure adequate pollination between heterotic parents which require overlapping flowering time. To understand the genetic control of flowering time, a genome wide association study (GWAS) was conducted to identify genomic regions associated with the control of flowering time in durum wheat. A total of 384 landraces and modern germplasm were assessed in 13 environments to determine five pheno-environments based on temperatures, day length and other climatic variables. Genotyping was conducted with 35K Axiom array to generate 7,740 polymorphic SNPs. In total, 20 significant QTLs for landraces and 27 QTLs for modern germplasm were identified for flowering time consistently across the environments. The candidate gene search indicated seven novel genes, namely PRR7, GRF, SVP, RRP6L1, Hd6, TCP1, and COP1/RGA in addition to a number of already known regulatory photoperiodic genes, PPDA and PPD-B and vernalization genes VRN-A1, VRN-B2 and VRN3 which have major impact in the genetic make-up of flowering time in landraces and elite germplasm. In summary, the results obtained from these experiments indicated sufficient heterosis in durum wheat and helped in physiological and molecular characterization of the best heterotic combinations and flowering time.