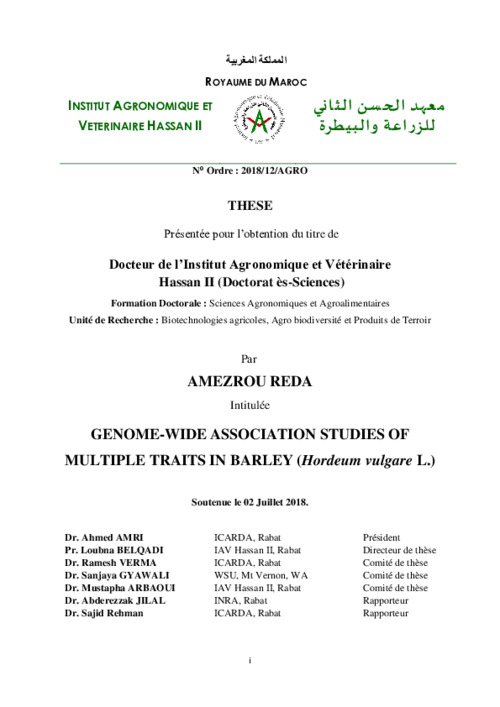 Barley (Hordeum vulgare L.) is one of the most important cereals worldwide. It is grown mainly for animal feed and malt but it is also used for food in several regions across the globe. There is a constant need for breeding high yielding barley cultivars with improved resistance to biotic and abiotic stresses. Introgression of novel genes into elite lines is one of the main activities in a breeding program and lead to the development of superior varieties that can cope with the environmental challenges. The aim of this research is to investigate the phenotypic and genetic diversity of a world panel of barley accessions selected from ICARDA gene bank and breeding germplasm and to identify markers associated with some important traits in barley (agronomic, disease resistance) using the Genome-Wide Association Mapping (GWAS) approach. The Association Mapping panel (AM-2014) was genotyped using the 9K iSelect SNP markers and phenotyped for seedling and adult-plant resistance to net form and spot form of net blotch. Agro-morphological, yield and yield components traits were also scored. The phenotype and genotypic data was used in a mixed linear model analysis accounting for population structure and kinship matrix to detect significant marker-trait associations, corrected after using the False Discovery Rate (FDR) approach. Markers in high Linkage disequilibrium (LD) and within the 3.6 cM LD decay were considered as same QTL. In total, 140 QTLs were identified in the present study for the studied traits. Some genomic regions harbor QTL for more than one trait and, based on map comparisons, 58 QTL have been found to concur with previously mapped QTL. For all traits together, 82 novel QTL have been detected. Novel associations discovered in this study could be validated in different populations or through carefully generated bi-parental mapping populations and the QTLs mapped are valuable resources for marker-assisted selection (MAS) in barley.