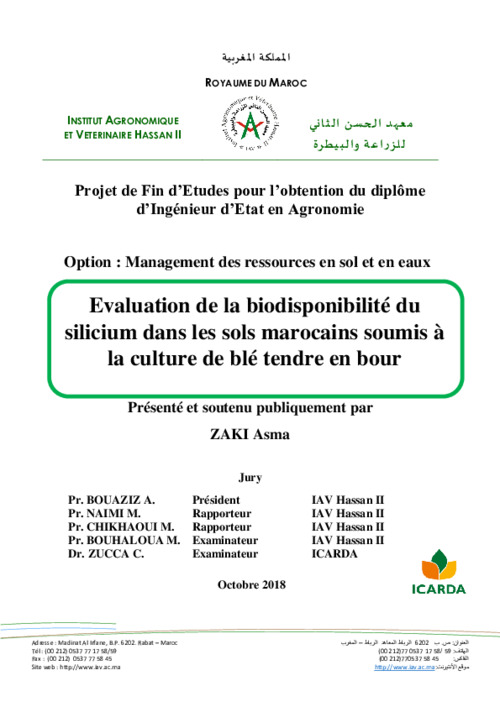 Many studies show that silicon is a beneficial element for the growth of plants, especially cereals, despite its non-essential element status. Hence, the reserve of bioavailable silicon in the soil can be a limiting factor to achieve optimal yields. The objective of our study is to characterize the status of silicon in Moroccan soils subjected to the cultivation of bread wheat in two regions of Morocco: Meknes and Settat. Given the diversity of their soils, our approach is to select certain soil classes based on soil descriptions. So, four classes have been identified: vertisols, calcimagnetic soils, isohumic soils and soils with sesquioxides. To do this, physicochemical analyzes were performed to determine soil characteristics, as well as to quantify the bioavailable fraction of silicon in these soils. At the end of this study, it should be said that the silicon content differs from one zone to another and from one soil class to another. The variation of the mobile silicon content for the Meknes study area is between 0.017 and 0.040 mg/g whereas in the Settat study area, the content varies between 0.031 and 0.055 mg / g. Comparing the content of mobile silicon found on each soil type, it can be said that mobile silicon is more abundant in isohumic soils (0.032 - 0.052 mg/g) and vertisols (0.027 - 0.054 mg/g) than on sesquioxide soils (0.016 - 0.042 mg / g) and calcimagnetic soils (0.028 - 0.037 mg / g). Thus, a set of relationships between the mobile silicon content and certain soil parameters have been defined: negative correlations with pH and total limestone, which means that when these parameters decrease, the mobile silicon content increases, and a positive correlation with Mg . However, other parameters are positively correlated with the mobile Si content depending on the soil classes: for the class of calcimagnetic soils, the class of iron sesquioxide soils and vertisols, we find a relation with the clay content, while for the class of isohumics, the mobile Si content is correlated with the Mg2+content.