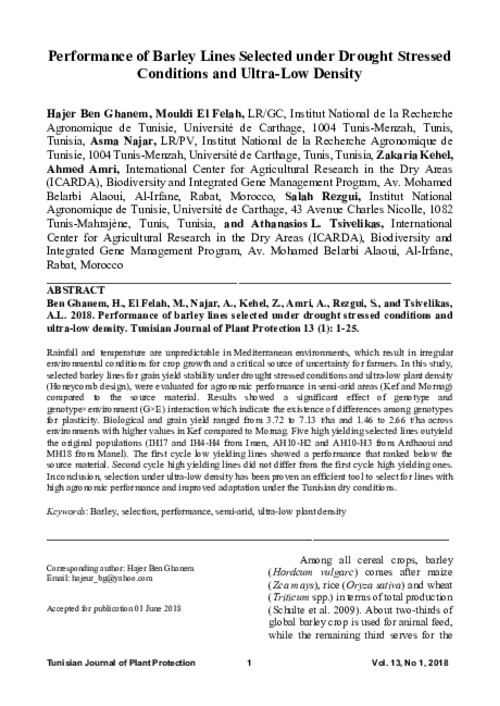 Rainfall and temperature are unpredictable in Mediterranean environments, which result in irregular environmental conditions for crop growth and a critical source of uncertainty for farmers. In this study, selected barley lines for grain yield stability under drought stressed conditions and ultra-low plant density (Honeycomb design), were evaluated for agronomic performance in semi-arid areas (Kef and Mornag) compared to the source material. Results showed a significant effect of genotype and genotype×environment (G×E) interaction which indicate the existence of differences among genotypes for plasticity. Biological and grain yield ranged from 3.72 to 7.13 t/ha and 1.46 to 2.66 t/ha across environments with higher values in Kef compared to Mornag. Five high yielding selected lines outyield the original populations (IH17 and IH4-H4 from Imen, AH10-H2 and AH10-H3 from Ardhaoui and MH18 from Manel). The first cycle low yielding lines showed a performance that ranked below the source material. Second cycle high yielding lines did not differ from the first cycle high yielding ones. In conclusion, selection under ultra-low density has been proven an efficient tool to select for lines with high agronomic performance and improved adaptation under the Tunisian dry conditions