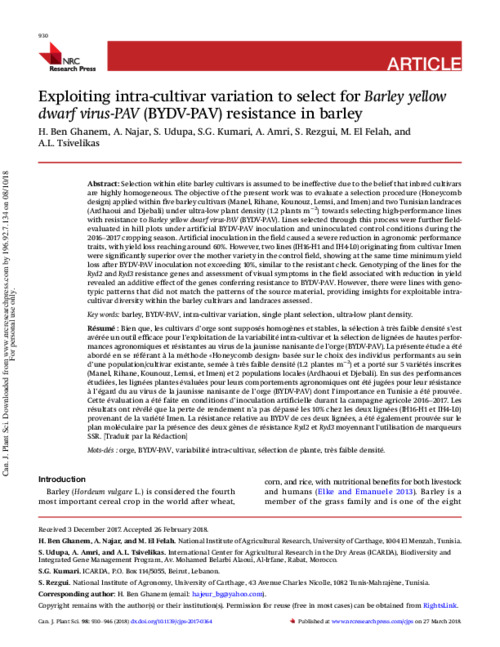 Selection within elite barley cultivars is assumed to be ineffective due to the belief that inbred cultivars are highly homogeneous. The objective of the present work was to evaluate a selection procedure (Honeycomb design) applied within five barley cultivars (Manel, Rihane, Kounouz, Lemsi, and Imen) and two Tunisian landraces (Ardhaoui and Djebali) under ultra-low plant density (1.2 plants m⁻²) towards selecting high-performance lines with resistance to Barley yellow dwarf virus-PAV (BYDV-PAV). Lines selected through this process were further field-evaluated in hill plots under artificial BYDV-PAV inoculation and uninoculated control conditions during the 2016–2017 cropping season. Artificial inoculation in the field caused a severe reduction in agronomic performance traits, with yield loss reaching around 60%. However, two lines (IH16-H1 and IH4-L0) originating from cultivar Imen were significantly superior over the mother variety in the control field, showing at the same time minimum yield loss after BYDV-PAV inoculation not exceeding 10%, similar to the resistant check. Genotyping of the lines for the Ryd2 and Ryd3 resistance genes and assessment of visual symptoms in the field associated with reduction in yield revealed an additive effect of the genes conferring resistance to BYDV-PAV. However, there were lines with genotypic patterns that did not match the patterns of the source material, providing insights for exploitable intracultivar diversity within the barley cultivars and landraces assessed.