Feedlot systems and sheep dietary imbalance in the Jordan Badia 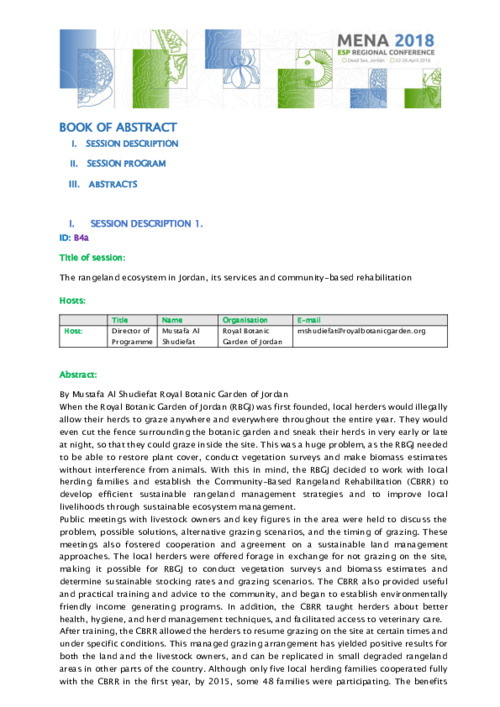 Sheep and goats’ production is a mainstay of the agricultural production systems in the Jordan Badia. Overgrazing and poor governance of communal grazing areas are very often pointed out as being the major causes of the landscape degradation. The high pressure from livestock is exacerbated by the presence of high numbers of “unproductive animals”. This has led to the adoption by farmers of alternative feeding systems essentially based on the use of supplemental purchased feed. This paper assesses efficiency of the feedlot system in the Jordan Badia and its adequacy in fulfilling the livestock nutrient requirements. Findings are based on flocks’ diet monitoring backed by informant interviews in the Majdiyah village between 2016 and 2017. Analysis of the feeding calendars confirms the predominance of supplemental purchased feedstuff in providing the essential nutriments at critical physiological stages (e.g. late pregnancy and suckling period). The ratio of concentrate-like type of feed to roughages (80:20 in average) is highly imbalanced and certainly not supportive of adequate digestion in ruminant species. The chemical composition revealed very low content in crude proteins of most of the feed resources except for wheat bran (13.35%). This highlights the importance farmers give in having regular supplies from this resource. Further evidence on the imbalance of the feedlot system comes from the analysis of blood-borne nutritional metabolites. Plasma levels of urea are 5 to 6-fold higher than normal physiological levels in both sheep and goats (5.85±1.34 and 6.06±2.16 mmol l-1 in respectively, sheep and goats) indicating a low digestive efficiency of proteins. Furthermore, a severe deficiency in calcium was observed at stages where calcium reserves are crucially important to support mammary growth, colostrum accumulation and milk synthesis. Recommendations are put forward on how to improve efficiency of the feedlot system including a rational use of the existing natural vegetation.