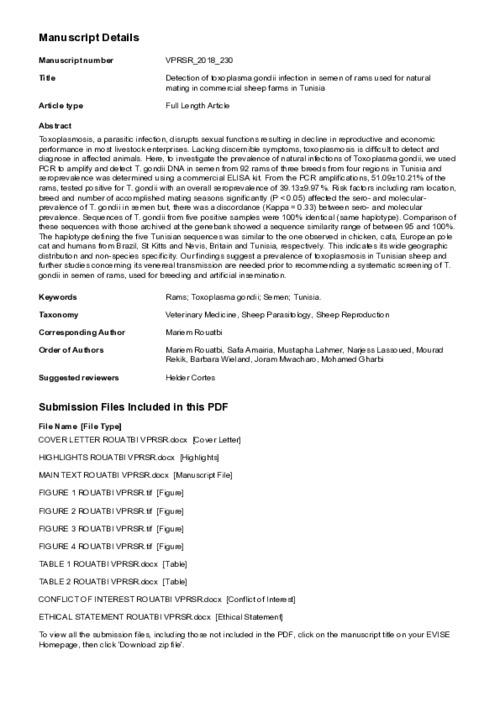 Toxoplasmosis, a parasitic infection, disrupts sexual functions resulting in decline in reproductive and economic performance in sheep. Lacking discernible symptoms, toxoplasmosis is difficult to detect and diagnose in infected animals. Here, to estimate the prevalence of natural infection by Toxoplasma gondii, we used PCR to amplify and detect T. gondii DNA in semen from 92 rams of three breeds from four regions in Tunisia and seroprevalence was determined using a commercial ELISA kit. From the PCR amplifications, 51.09 ± 10.21% of the rams were tested positive for T. gondii with an overall seroprevalence of 39.13 ± 9.97%. Risk factors including ram location and number of accomplished mating seasons significantly (p < .05) affected the sero- and molecular prevalence of T. gondii in semen but, there was a fair concordance between sero- and molecular prevalence (Kappa = 0.33). Sequences of T. gondii from five positive samples were 100% identical (same haplotype). Comparison of these sequences with those archived at the GenBank showed a sequence similarity range between 95 and 100%. The haplotype defining the five Tunisian sequences was similar to the one observed in chicken, cats, European pole cat and humans from Brazil, St Kitts and Nevis, Great Britain and Tunisia, respectively. This indicates its wide geographic distribution and non-species specificity. Our findings suggest a high prevalence of toxoplasmosis in Tunisian matting rams; further studies concerning its venereal transmission capacity are needed prior to recommending a systematic screening of T. gondii DNA in rams' semen used for both natural breeding and artificial insemination.