Organic breeding in Sarda ewes: utilization of the ram effect in an artificial insemination program 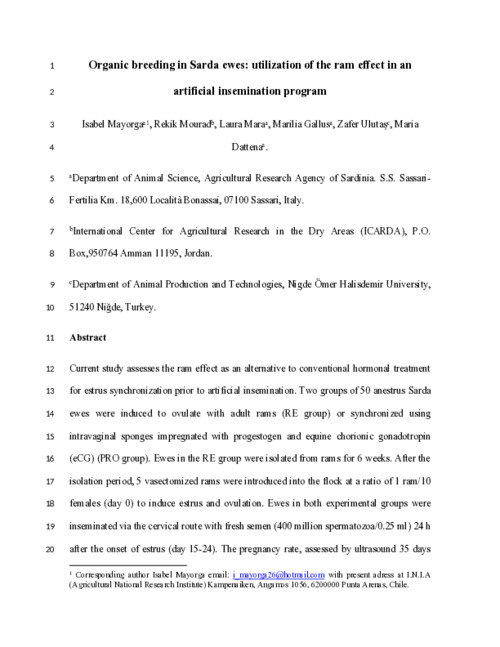 The current study assesses the ram effect as an alternative to conventional hormonal treatment for estrus synchronization prior to artificial insemination. Two groups of 50 anoestrus Sarda ewes were induced to ovulate with adult rams (RE group) or synchronized using intravaginal sponges impregnated with progestogen and equine chorionic gonadotropin (eCG) (PRO group). Ewes in the RE group were isolated from rams for 6 weeks. After the isolation period, 5 vasectomized rams were introduced into the flock at a ratio of 1 ram/10 females (day 0) to induce estrus and ovulation. Ewes in both experimental groups were inseminated via the cervical route with fresh semen (400 million spermatozoa/0.25 ml) 24 h after the onset of estrus (day 15–24). The pregnancy rate, assessed by ultrasound 35 days after insemination, was 48.9% (24/49) and 43.47% (22/50) for sheep in RE and PRO groups respectively. Lambing rates were identical to pregnancy rates in both groups, while the prolificacy rate was 120% (59/49) and 130% (65/50) in RE and PRO groups respectively. No significant differences were found between the 2 groups. The data supports the conclusion that the ram effect can be used successfully to synchronize estrus in organic farming operations.