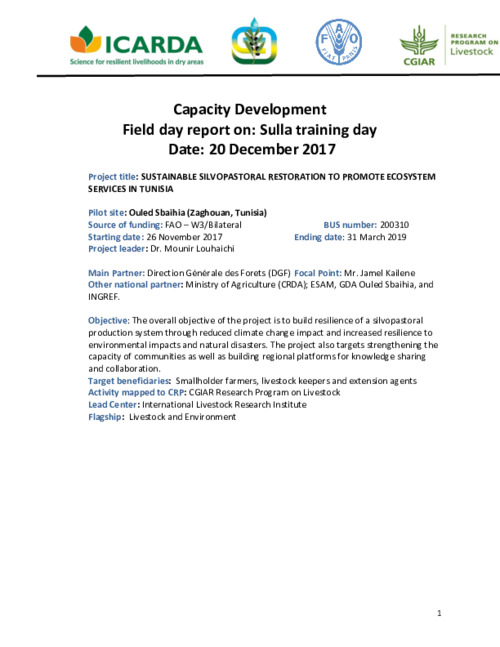 The Sulla training day was organized on the 20th of December 2017 in the local CBO of Ouled Sbaihia, in Sbaihia, Zaghouan, with a total number of 35 participants CRDA Zaghouan was represented by M. Lataif Hasnaoui (Forest District Chief) and M. Hsen Nahdi (Forest Service Chief), while INGREF was represented by Dr. Rania Mechrgui. The training, presented by Dr. Slim Slim, focused on sulla cultivation from soil preparation for sowing to harvesting and fodder conservation. all farmers were given an opportunity to share their knowledge on sulla with the trainer and the other participants. The local population in Sbaihia had ancient knowledge of sulla cultivation and acknowledged that it is ideal for animal feeding (sheep, goat and cattle) as well as for soil protection (reinforcement in organic matter and protection against water erosion). However, farmers had no knowledge of its exploitation and its conservation. They stated that the obstacle they have encountered is the unavailability of sulla seeds in the market, which is causing the low cultivation of sulla in the region. After the training, farmers wishing to cultivate sulla (Appendix 3) received free sulla seeds (Figure 2) provided by CBO varying between 20 kg, 40 kg and 80 kg for sowing areas varying between 0.5 ha, 1 ha and 2 ha.