Minutes of the workshop of the draft pastoral code for Tunisia April 30, 2018 - Tunis, Tunisia 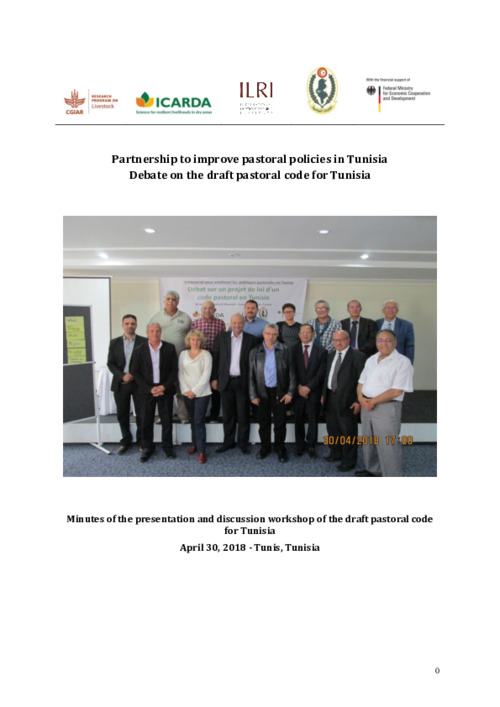 Minutes of the presentation and discussion workshop of the draft pastoral code for Tunisia April 30, 2018 - Tunis, Tunisia attended by several stakeholders. The time allocated for the debates (more than two hours) made it possible to ensure a wide participation with remarks, recommendations and arguments. The exchange was successful with a confirmed interest from the participants in the engaged process and the projected pastoral code. The representatives of the different institutions spoke with often positive interactions with the other participants. Overall, the main suggestions / recommendations raised covered the following aspects: 1. Need to include and fine-tune definitions and terminologies as pastoralism, rangelands, users, land-owners, infrastructure, etc.; 2. Broaden participation and partnership mobilization for the pastoral code development and dissemination. Synergy with other ongoing initiatives is to be considered in next steps, including the “Integrated Landscape Management Project” (IFMP co-funded by the World Bank) and the initiative introduced by the IRA Medenine with the support of IFAD projects (PRODESUD and PRODEFIL); this without forgetting to take into consideration the gender aspect in future discussions; 3. Do not forget to think now about the institutional anchoring of the pastoral code. This step will be scheduled in a timely manner and supported by expertise in this area; 4. Think about the "media coverage" of the pastoral code while ensuring effective lobbying. The timing is opportune because the country is engaged in a broad process of decentralization; 5. Do not stop the process and act according to the same procedure of consultation and mobilization of partners around this pastoral law in Tunisia