Characterization of seasonal pattern of drought stress using modeling approach. I. An environmental characterization reveals that water stress is currently not a major constraint to sorghum production in Mali 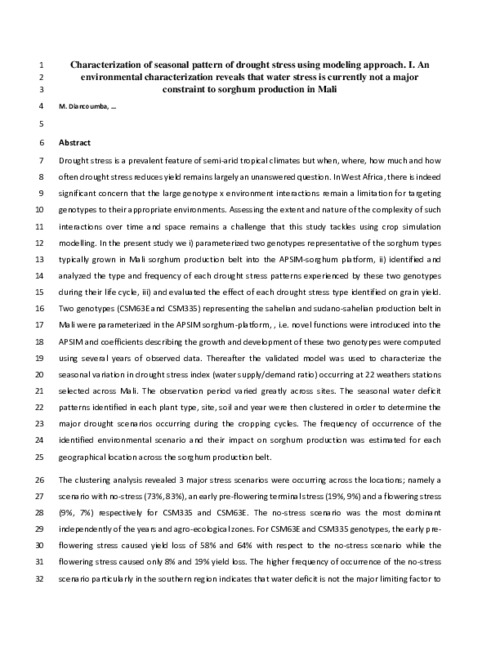 Madina Diancoumba. (16/11/2018). Characterization of seasonal pattern of drought stress using modeling approach. I. An environmental characterization reveals that water stress is currently not a major constraint to sorghum production in Mali.

Drought stress is a prevalent feature of semi-arid tropical climates but when, where, how much and how often drought stress reduces yield remains largely an unanswered question. In West Africa, there is indeed significant concern that the large genotype x environment interactions remain a limitation for targeting genotypes to their appropriate environments. Assessing the extent and nature of the complexity of such interactions over time and space remains a challenge that this study tackles using crop simulation modelling. In the present study we i) parameterized two genotypes representative of the sorghum types typically grown in Mali sorghum production belt into the APSIM-sorghum platform, ii) identified and analyzed the type and frequency of each drought stress patterns experienced by these two genotypes during their life cycle, iii) and evaluated the effect of each drought stress type identified on grain yield. Two genotypes (CSM63E and CSM335) representing the sahelian and sudano-sahelian production belt in Mali were parameterized in the APSIM sorghum-platform, , i.e. novel functions were introduced into the APSIM and coefficients describing the growth and development of these two genotypes were computed using several years of observed data. Thereafter the validated model was used to characterize the seasonal variation in drought stress index (water supply/demand ratio) occurring at 22 weathers stations selected across Mali. The observation period varied greatly across sites. The seasonal water deficit patterns identified in each plant type, site, soil and year were then clustered in order to determine the major drought scenarios occurring during the cropping cycles. The frequency of occurrence of the identified environmental scenario and their impact on sorghum production was estimated for each geographical location across the sorghum production belt. The clustering analysis revealed 3 major stress scenarios were occurring across the locations; namely a scenario with no-stress (73%, 83%), an early pre-flowering terminal stress (19%, 9%) and a flowering stress (9%, 7%) respectively for CSM335 and CSM63E. The no-stress scenario was the most dominant independently of the years and agro-ecological zones. For CSM63E and CSM335 genotypes, the early pre-flowering stress caused yield loss of 58% and 64% with respect to the no-stress scenario while the flowering stress caused only 8% and 19% yield loss. The higher frequency of occurrence of the no-stress scenario particularly in the southern region indicates that water deficit is not the major limiting factor to sorghum production in this region. Also, the still relatively low yield under the no-stress scenario implies that other factors (e.g. plant density, sowing date, N application) are limiting the productivity of sorghum in Mali. The established framework can be further elaborated to assist sorghum improvement programs to set priorities for guiding agri-interventions.