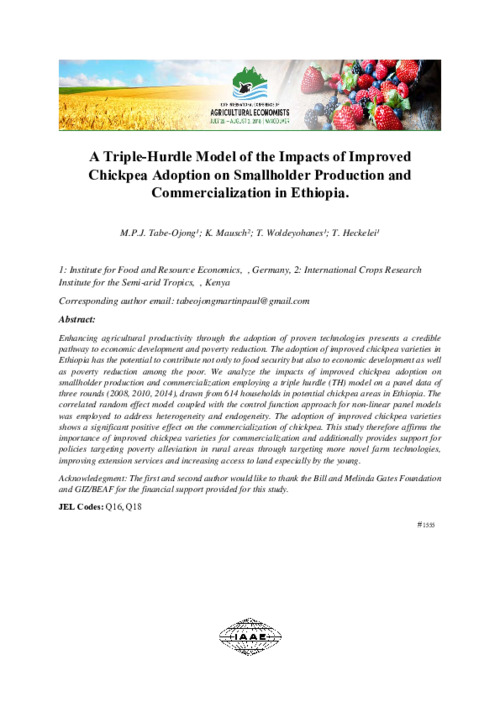 Enhancing agricultural productivity through the adoption of proven technologies presents a credible pathway to economic development and poverty reduction. The adoption of improved chickpea varieties in Ethiopia has the potential to contribute not only to food security but also to economic development as well as poverty reduction among the poor. We analyze the impacts of improved chickpea adoption on smallholder production and commercialization employing a triple hurdle (TH) model on a panel data of three rounds (2008, 2010, 2014), drawn from 614 households in potential chickpea areas in Ethiopia. The correlated random effect model coupled with the control function approach for non-linear panel models was employed to address heterogeneity and endogeneity. The adoption of improved chickpea varieties shows a significant positive effect on the commercialization of chickpea. This study therefore affirms the importance of improved chickpea varieties for commercialization and additionally provides support for policies targeting poverty alleviation in rural areas through targeting more novel farm technologies, improving extension services and increasing access to land especially by the young.