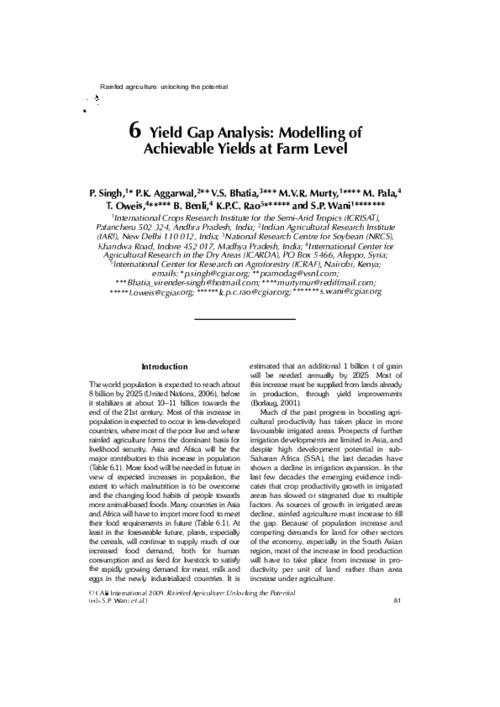 The world population is expected to reach about 8 billion by 2025 (United Nations, 2006), before it stabilizes at about 10-11 billion towards the end of the 21st century. Most of this increase in population is expected to occur in less-developed countries, where most of the poor live and where rainfed agriculture forms the dominant basis for livelihood security. Asia and Africa will be the major contributors to this increase in population (Table 6.1). More food will be needed in future in view of expected increases in population, the extent to which malnutrition is to be overcome and the changing food habits of people towards more animal-based foods. Many countries in Asia and Africa will have to import more food to meet their food requirements in future (Table 6.1). At least in the foreseeable future, plants, especially the cereals, will continue to supply much of our increased food demand, both for human consumption and as feed for livestock to satisfy the rapidly growing demand for meat, milk and eggs in the newly industrialized countries. It is estimated that an additional 1 billion t of grain will be needed annually by 2025. Most of this increase must be supplied from lands already in production, through yield improvements (Borlaug, 2001). Much of the past progress in boosting agricultural productivity has taken place in more favourable irrigated areas. Prospects of further irrigation developments are limited in Asia, and despite high development potential in subSaharan Africa (SSA), the last decades have shown a decline in irrigation expansion. In the last few decades the emerging evidence indicates that crop productivity growth in irrigated areas has slowed or stagnated due to multiple factors. As sources of growth in irrigated areas decline, rainfed agriculture must increase to fill the gap. Because of population increase and competing demands for land for other sectors of the economy, especially in the South Asian region, most of the increase in food production will have to take place from increase in productivity per unit of land rather than area ncrease under agriculture.