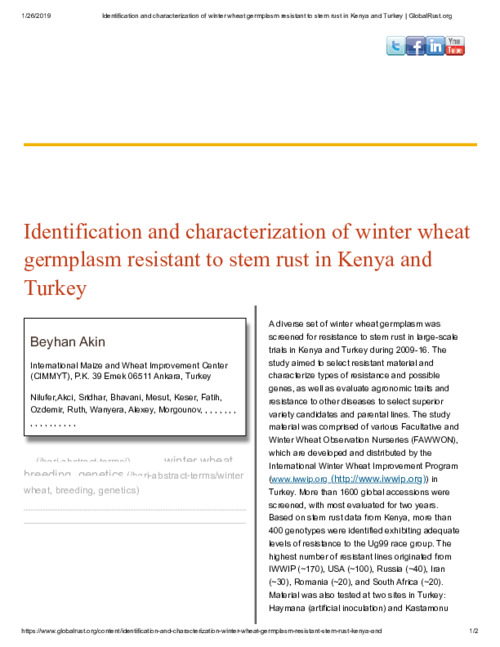 A diverse set of winter wheat germplasm was screened for resistance to stem rust in large-scale trials in Kenya and Turkey during 2009-16. The study aimed to select resistant material and characterize types of resistance and possible genes, as well as evaluate agronomic traits and resistance to other diseases to select superior variety candidates and parental lines. The study material was comprised of various Facultative and Winter Wheat Observation Nurseries (FAWWON), which are developed and distributed by the International Winter Wheat Improvement Program (www.iwwip.org) in Turkey. More than 1600 global accessions were screened, with most evaluated for two years. Based on stem rust data from Kenya, more than 400 genotypes were identified exhibiting adequate levels of resistance to the Ug99 race group. The highest number of resistant lines originated from IWWIP (~170), USA (~100), Russia (~40), Iran (~30), Romania (~20), and South Africa (~20). Material was also tested at two sites in Turkey: Haymana (artificial inoculation) and Kastamonu (natural infection). There was no significant correlation between stem rust severities in Kenya and in Turkey, due to differences in stem rust pathotypes. However, a set of germplasm (more than 100 entries) has been identified as resistant in both countries. This set represents promising material as variety candidates and parental lines; another study is currently identifying the genes controlling the stem rust resistance in this population. IWWIP distributed stem rust resistant germplasm to its global collaborators during 2010-2015, in response to the threat from the Ug99 race group. New resistant germplasm combining broad adaptation, high yields, and resistance to other diseases is available on request.