Soils and Soil Ecology in Khorezm 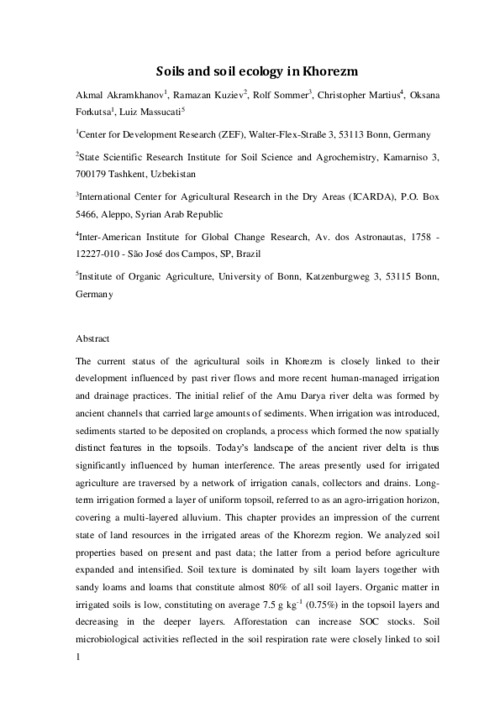 The current status of the agricultural soils in Khorezm is closely linked to their development influenced by past river flows and more recent human-managed irrigation and drainage practices. The initial relief of the Amudarya river delta was formed by ancient channels that carried large amounts of sediments. When irrigation was introduced, sediments started to be deposited on croplands, a process which formed the now spatially distinct features in the topsoils. Today’s landscape of the ancient river delta is thus significantly influenced by human interference. The areas presently used for irrigated agriculture are traversed by a network of irrigation canals, collectors and drains. Long-term irrigation formed a layer of uniform topsoil, referred to as an agro-irrigation horizon, covering a multi-layered alluvium. This chapter provides an impression of the current state of land resources in the irrigated areas of the Khorezm region. We analyzed soil properties based on present and past data; the latter from a period before agriculture expanded and intensified. Soil texture is dominated by silt loam layers together with sandy loams and loams that constitute almost 80% of all soil layers. Organic matter in irrigated soils is low, constituting on average 7.5 g kg−1 (0.75%) in the topsoil layers and decreasing in the deeper layers. Afforestation can increase SOC stocks. Soil microbiological activities reflected in the soil respiration rate were closely linked to soil organic carbon content and revealed considerable carbon accumulation under zero-tillage systems. Soil macrofauna density was highest under vegetation dominated by one tree species, Euphrates poplar (Populus euphratica Oliv.; Salicaceae), but its biodiversity was highest in cultivated sites (and dominated by small predatory arthropods). These results may serve as benchmarks in future monitoring of land use effects on soil quality. Most subsoils in Khorezm are slightly- to medium-saline, whereas the majority of topsoils above 60 cm are strongly saline. Between 1960 and 1990, moderately saline soils increased from 21% to 31%, and highly saline soils, from 6% to 21%.