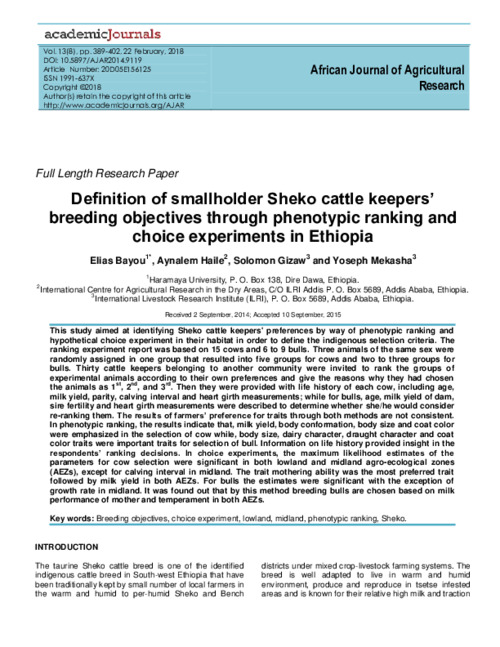 This study aimed at identifying Sheko cattle keepers' preferences by way of phenotypic ranking and hypothetical choice experiment in their habitat in order to define the indigenous selection criteria. The ranking experiment report was based on 15 cows and 6 to 9 bulls. Three animals of the same sex were randomly assigned in one group that resulted into five groups for cows and two to three groups for bulls. Thirty cattle keepers belonging to another community were invited to rank the groups of experimental animals according to their own preferences and give the reasons why they had chosen the animals as 1st, 2nd, and 3rd. Then they were provided with life history of each cow, including age, milk yield, parity, calving interval and heart girth measurements; while for bulls, age, milk yield of dam, sire fertility and heart girth measurements were described to determine whether she/he would consider re-ranking them. The results of farmers’ preference for traits through both methods are not consistent. In phenotypic ranking, the results indicate that, milk yield, body conformation, body size and coat color were emphasized in the selection of cow while, body size, dairy character, draught character and coat color traits were important traits for selection of bull. Information on life history provided insight in the respondents’ ranking decisions. In choice experiments, the maximum likelihood estimates of the parameters for cow selection were significant in both lowland and midland agro-ecological zones (AEZs), except for calving interval in midland. The trait mothering ability was the most preferred trait followed by milk yield in both AEZs. For bulls the estimates were significant with the exception of growth rate in midland. It was found out that by this method breeding bulls are chosen based on milk performance of mother and temperament in both AEZs.