Adaptation of Crop and Forage Genotypes to Soils Affected by Salinity 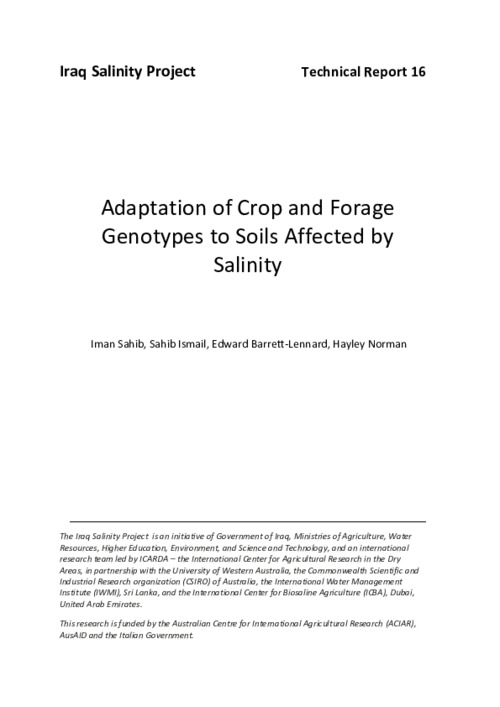 This report presents the research in progress for the Iraq Salinity Research project’s research component on the adaptation of crop and forage genotypes to soils affected by salinity. It describes the outcome of three experiments: The testing of the effects of irrigation with high B water on the growth of barley cultivars and wheat); testing of the adaptation of sorghum and pearl millet); testing of the adaptation of annual forage species). Our focus was on soils that fell into two general ECe classes: 10-20, and 20-30i. This study tested the adaptation of a range of key crop and forage species for the tolerance to the saline conditions found in Iraq. In addition, the research team tested the effects of irrigation with water of elevated boron on the growth of wheat and barley in a mirror trial in Syria. Initial conclusions, point to high production of guar, sesbania and sorghum at Dujailah soils, which have productive plant capacity of 6-8 dS/m and high levels of variations in salinity tolerant species. The mirror trial in Der Azzor, in Syria, shows that irrigation with non-saline water raises good yields of boron-tolerant wheat. Repeating a similar experiment in Iraq noted that hot water extractable boron concentrations could be high. Other remarks speak of the relationship between salinity and boron on yield, forage growing on salt, and boron concentrations in tall wheatgrass leaves.