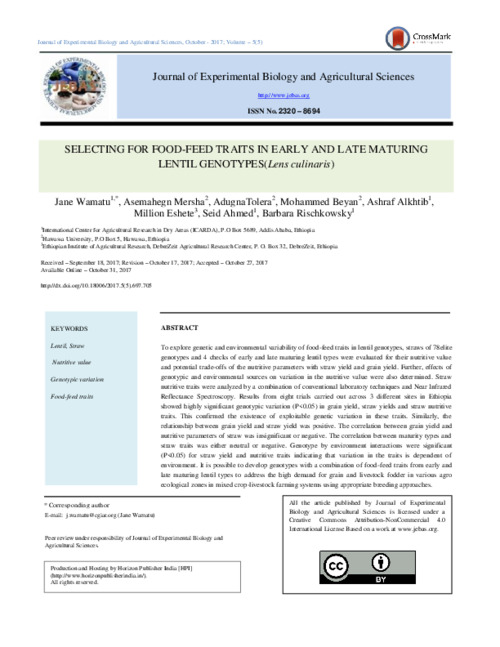 To explore genetic and environmental variability of food-feed traits in lentil genotypes, straws of 78elite genotypes and 4 checks of early and late maturing lentil types were evaluated for their nutritive value and potential trade-offs of the nutritive parameters with straw yield and grain yield. Further, effects of genotypic and environmental sources on variation in the nutritive value were also determined. Straw nutritive traits were analyzed by a combination of conventional laboratory techniques and Near Infrared Reflectance Spectroscopy. Results from eight trials carried out across 3 different sites in Ethiopia showed highly significant genotypic variation (P<0.05) in grain yield, straw yields and straw nutritive traits. This confirmed the existence of exploitable genetic variation in these traits. Similarly, the relationship between grain yield and straw yield was positive. The correlation between grain yield and nutritive parameters of straw was insignificant or negative. The correlation between maturity types and straw traits was either neutral or negative. Genotype by environment interactions were significant (P<0.05) for straw yield and nutritive traits indicating that variation in the traits is dependent of environment. It is possible to develop genotypes with a combination of food-feed traits from early and late maturing lentil types to address the high demand for grain and livestock fodder in various agro ecological zones in mixed crop-livestock farming systems using appropriate breeding approaches.