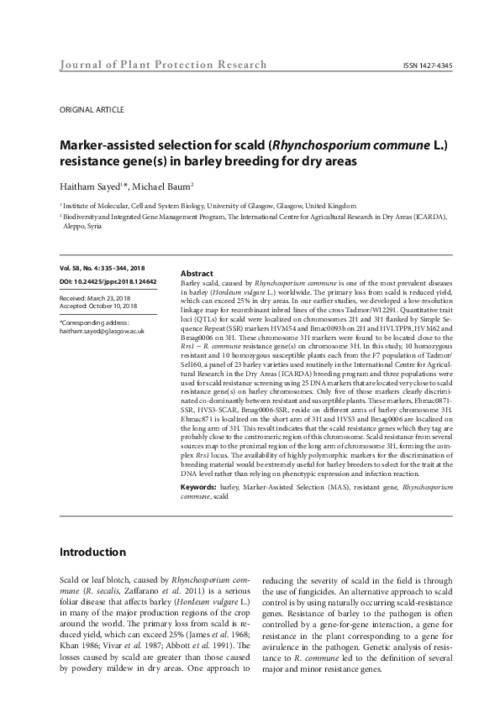 Barley scald, caused by Rhynchosporium commune is one of the most prevalent diseases in barley (Hordeum vulgare L.) worldwide. The primary loss from scald is reduced yield, which can exceed 25% in dry areas. In our earlier studies, we developed a low-resolution linkage map for recombinant inbred lines of the cross Tadmor/WI2291. Quantitative trait loci (QTLs) for scald were localized on chromosomes 2H and 3H flanked by Simple Sequence Repeat (SSR) markers HVM54 and Bmac0093b on 2H and HVLTPP8, HVM62 and Bmag0006 on 3H. These chromosome 3H markers were found to be located close to the Rrs1 − R. commune resistance gene(s) on chromosome 3H. In this study, 10 homozygous resistant and 10 homozygous susceptible plants each from the F7 population of Tadmor/ Sel160, a panel of 23 barley varieties used routinely in the International Centre for Agricultural Research in the Dry Areas (ICARDA) breeding program and three populations were used for scald resistance screening using 25 DNA markers that are located very close to scald resistance gene(s) on barley chromosomes. Only five of those markers clearly discriminated co-dominantly between resistant and susceptible plants. These markers, Ebmac0871SSR, HVS3-SCAR, Bmag0006-SSR, reside on different arms of barley chromosome 3H. Ebmac871 is localized on the short arm of 3H and HVS3 and Bmag0006 are localized on the long arm of 3H. This result indicates that the scald resistance genes which they tag are probably close to the centromeric region of this chromosome. Scald resistance from several sources map to the proximal region of the long arm of chromosome 3H, forming the complex Rrs1 locus. The availability of highly polymorphic markers for the discrimination of breeding material would be extremely useful for barley breeders to select for the trait at the DNA level rather than relying on phenotypic expression and infection reaction.