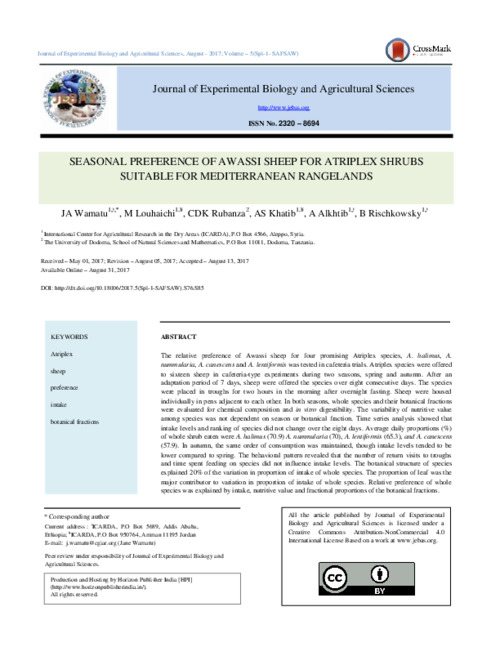 The relative preference of Awassi sheep for four promising Atriplex species, A. halimus, A. nummularia, A. canescens and A. lentiformis was tested in cafeteria trials. Atriplex species were offered to sixteen sheep in cafeteria-type experiments during two seasons, spring and autumn. After an adaptation period of 7 days, sheep were offered the species over eight consecutive days. The species were placed in troughs for two hours in the morning after overnight fasting. Sheep were housed individually in pens adjacent to each other. In both seasons, whole species and their botanical fractions were evaluated for chemical composition and in vitro digestibility. The variability of nutritive value among species was not dependent on season or botanical fraction. Time series analysis showed that intake levels and ranking of species did not change over the eight days. Average daily proportions (%) of whole shrub eaten were A. halimus (70.9) A. nummularia (70), A. lentiformis (65.3), and A. canescens (57.9). In autumn, the same order of consumption was maintained, though intake levels tended to be lower compared to spring. The behavioral pattern revealed that the number of return visits to troughs and time spent feeding on species did not influence intake levels. The botanical structure of species explained 20% of the variation in proportion of intake of whole species. The proportion of leaf was the major contributor to variation in proportion of intake of whole species. Relative preference of whole species was explained by intake, nutritive value and fractional proportions of the botanical fractions.