“Livestock for resilience”: Revisiting the role of livestock in the major agricultural production systems of the MENA region 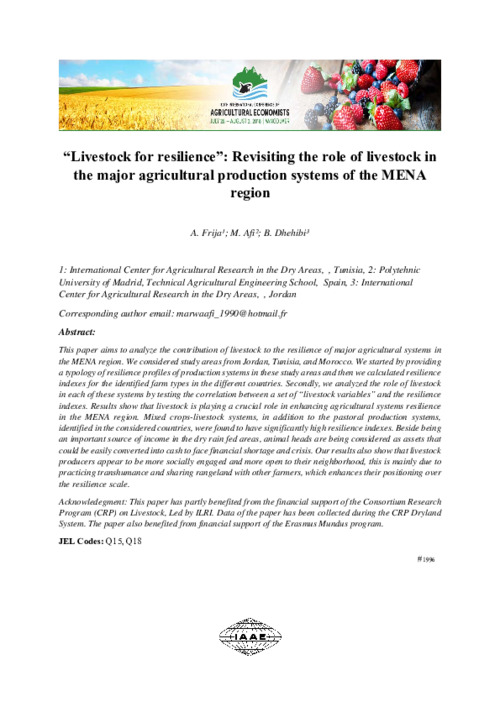 This paper aims to analyze the contribution of livestock to the resilience of major agricultural systems in the MENA region. We considered study areas from Jordan, Tunisia, and Morocco. We started by providing a typology of resilience profiles of production systems in these study areas and then we calculated resilience indexes for the identified farm types in the different countries. Secondly, we analyzed the role of livestock in each of these systems by testing the correlation between a set of “livestock variables” and the resilience indexes. Results show that livestock is playing a crucial role in enhancing agricultural systems resilience in the MENA region. Mixed crops-livestock systems, in addition to the pastoral production systems, identified in the considered countries, were found to have significantly high resilience indexes. Beside being an important source of income in the dry rain fed areas, animal heads are being considered as assets that could be easily converted into cash to face financial shortage and crisis. Our results also show that livestock producers appear to be more socially engaged and more open to their neighborhood, this is mainly due to practicing transhumance and sharing rangeland with other farmers, which enhances their positioning over the resilience scale.