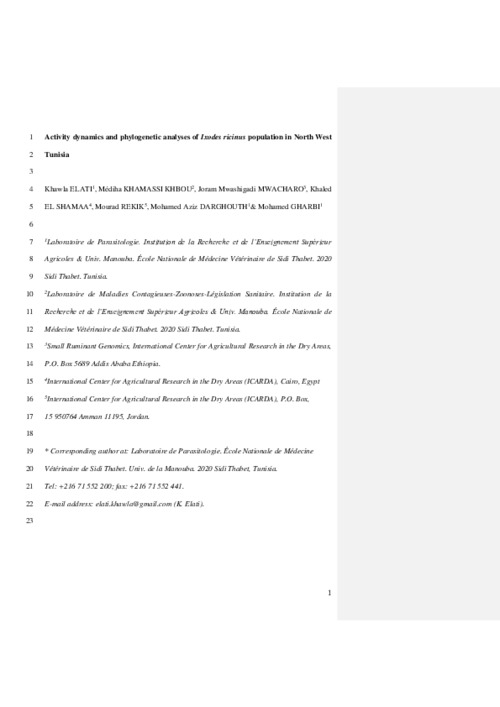 The present study aimed to investigate the phenology of Ixodes ricinus in Aïn Draham forest (Northwest Tunisia) and evaluate the correlation between abiotic factors (temperature, relative humidity and rainfall). Ticks were collected monthly from September 2016 to August 2017 using dragging techniques. A total of 116 specimens were collected from 5 sites, consisting of 47 adults (19 females and 28 males, sex ratio M: F= 1.47), 45 nymphs and 24 larvae presenting a prevalence of 40.5±8.9%, 38.8±8.9% and 20.7±7.4%, respectively (p=0.001). Adult Ixodes ricinus were questing hosts from October to May, while the nymphs were collected between May (n=23) and August (n=1). Larvae were present in the ground between July and September. The number of ticks varied significantly according to sites (p<0.01). The highest number of ticks was recorded in site 2 (37%; n=43) and the lowest (2.58%; n=3) in site 4. This difference was probably associated to the host availability and the characteristic of the sites. Statistical analyses showed a significant correlation between adult’s tick number and meteorological parameters such as mean humidity (Pearson r= -0.77; P = 0.003), mean temperature (Pearson r= -0.74; P = 0.006), mean rainfall (Pearson r= 0.64; P = 0.025). The comparison between twenty 16S rDNA sequences with approximately 444 bp length showed a variability among 11 sequences which were deposited in GenBank. There was a low genetic divergence (1-2%) among the I. ricinus isolates collected from the five sites. The amplicons showed 95-100% homology with I. ricinus sequences available in GenBank from different countries. These results should be supported by other surveys in other regions from Tunisia to better understand the biology of I. ricinus in its wild biotope and the influence of environmental factors on its distribution.