Ticks of Tunisia, a review 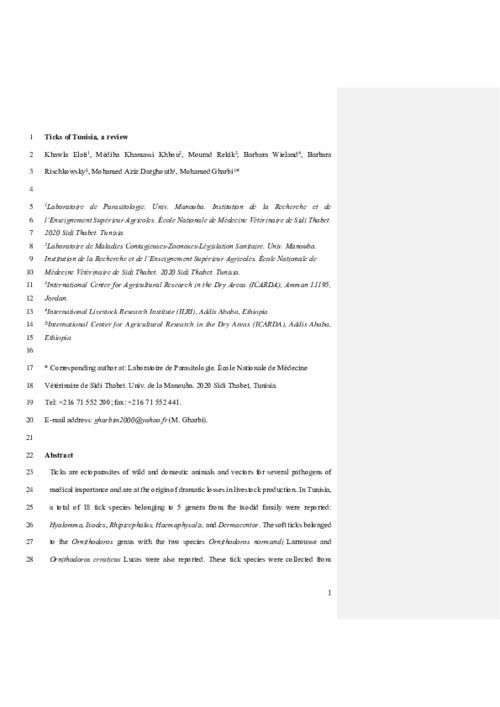 Ticks are ectoparasites of wild and domestic animals and vectors for several pathogens of medical importance and are at the origin of dramatic losses in livestock production. In Tunisia, a total of 18 tick species belonging to 5 genera from the ixodid family were reported: Hyalomma, Ixodes, Rhipicephalus, Haemaphysalis, and Dermacentor. The soft ticks belonged to the Ornithodoros genus with the two species Ornithodoros normandi Larrousse and Ornithodoros erraticus Lucas were also reported. These tick species were collected from different bioclimatic zone. Some species have a large geographical distribution and some others their occurrence is limited to some regions or rarely recorded. The most abundant genera are Hyalomma and Rhipicephalus. The current review is a synthesis of published data on tick populations in Tunisia, their geographic distribution, preferential hosts, activity dynamics, the pathogens they transmit and tick control programmes. This study allows to find the gap of knowledge on biology of tick species in Tunisia and to establish a research agenda since many tick species in Tunisia are forgotten or neglected and we don’t have information about their vectorial capacity.