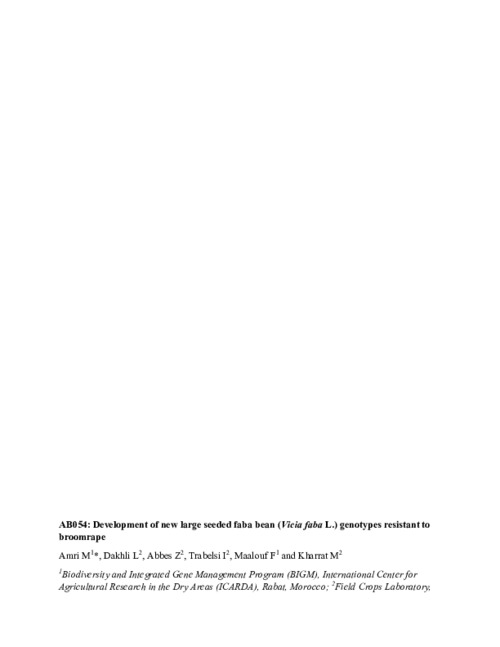 Broomrapes are one of the major constraints limiting faba bean cultivation and production in the Mediterranean and Sub-Saharan Africa regions. The infested areas are in continuous expansion due to the fast spread and invasion of the parasite to new agriculture lands. Integrated control management based on genetic resistance seems to be the most effective way to control Orobanche. Faba bean breeding for resistance to Orobanche was intensified since the 1980s and many specific breeding programs were initiated specially in Egypt, Morocco, Tunisia and Spain. So far, several small seeded faba bean resistant lines and varieties have been released in different countries. Unfortunately, no resistant material has been described for large seeded faba bean that remain cultivated in large scale in these region. In Tunisia, where O. foetida was reported to be more harmful than O. crenata, the breeding program selected several large seeded faba bean lines (100 – 135 g for 100 seed weight) showing high yield potential and good resistance level to Orobanche. In total, 241 faba bean lines, including two repeated small (cv. Badi) and large (cv. Chahbi) seeded susceptible checks, were screened for resistance to O. foetida in a heavy infested sick plot in OuedBeja research station during the cropping season 2015/16. The trial was conducted according an augmented design. Results showed that 43.6% (81 lines) of the tested lines showed a Parasitism Index (IP) less than 2 against 7.2 recorded for both small and large seeded checks. Third of the tested lines developed less than one emerged Orobanche shoot per plant in average compared to 3.4 and 5.4 recorded respectively for Badi and Chahbi. The hundred seed weight (HSW) of the tested collection varied from 55 to 143 g from which 115 lines had HSW more than 100 g and 12 more than 120 g.